The Ghosts of the 17Hundred90 Inn

The Ghost of Anne

The most well-known ghost at the 17Hundred90 Inn is the ghost of Anne. Anne has been seen on the top floor of the Inn, in Room 204 specifically.

Anne, as she is fondly called by the staff, seems to enjoy messing with people and their belongings. Guests who stay in Room 204 regularly report having their belongings messed with, rearranged…or even come up missing.

People have also said they feel the presence of Anne while staying in the room. Sheets have been tugged by an unseen force, the sobs of a woman crying have emanated from the dark corners of Room 204 after the lights go out. It is no wonder that people who come to Savannah hoping for an encounter with a ghost ask to stay in room 204. Those hoping to have an encounter with the ghost they call Anne are not often let down.

So, who is this ‘Anne’? Well, as the story goes, there was a woman living in the building which makes up the east part of the property. Different variations of this story pop up, but the premise is always the same. Suffering from a loss of a loved one, Anne threw herself over the railing of her second story balcony. Her body smashed into the brick courtyard below, cutting her life short. There are a few problems with this story, though, all of the variations.

The first Anne associated with the 17Hundred90 Inn is Anne White, the wife of Steele White. Steele was the gentleman who was responsible for the building of the first two parts of the building. However, Steele was not around for the finish of construction. He died in a horse riding accident in 1823. His widow, Anne, was obviously heartbroken. This fits the story being told so far. However, after Steele died, she moved from the house. She moved out to the Isle of Hope, south of Savannah. There, she lived with her sister and her brother-in-law for a number of years. In addition to this, the part of the building that Anne reportedly jumped from wasn’t even built until 1888. These two facts seem to rule out Anne White from being the Anne in the ghost story that is commonly told. So, who else could it be?

Is there Another Anne Haunting the 17hundred90 Inn?

Anne Powers lived to be in her 80′s. Until the time of her death, she resided at 128 Lincoln Street, where the 17Hundred90 is located now. She is mentioned in the 1920 census as being 78 years of age. If you were to go back and look at an earlier census, it reports that Anne had lived at that address for a very long time, since the 1890 census. She lived there with her husband, Patrick. At the time of the 1920 census, he was 82 years of age.

So, was this our Anne, the one who threw herself from the balcony after her husband went off to sea? Very unlikely, actually, I say absolutely not.

So, who is this ‘Anne’ who seems to haunt parts of the 17Hundred90 Inn? I don’t know. I can’t find anyone who lived there, named Anne, that fits the story. Is it possible that someone jumped from the balcony, killing themselves. I guess it is possible, even though I cannot find evidence to support this. I suspect that the ghost that everyone calls Anne is someone who was associated with the building, but not necessarily died there.

For those who choose to stay at the 17hundred90 Inn, there is always a bit of a risk that during the course of the night...sometheing not quite living might make its presence known. Would you expect anything else of a haunted hotel?

For Lynn H., and her two daughters and their friends, they sought out the 17hundred90 Inn because they wanted to experience some ghostly activity. So, when they were already bound for a trip to New York from their home in South Florida, they decided to make a stop in infamous Savannah hotel.

After all, what could go wrong?

Lynn and her family arrived at the historic property, only to find out that there was only one guest room available for the night ... Room 204. Anne's room.

Entering Room 204 from the outside entrance, Lynn and the girls immediately set to putting down their bags. While her daughters lounged on the bed, Lynn caught notice of a teddy bear on the fireplace mantle. Between its legs was a purple ball, with some Mardi Gras beads tangled around the bear's body.

Straight away, Lynn recognized the teddy bear. It was the same one that the TV show, Ghost Hunters had brought to the room during their paranormal investigation of the 17hundred90 Inn a few years ago. Originally, the bar had been outfitted with a video camera inside, so that during the night, the Ghost Hunters crew could see if anything happened in the room. In the paranormal field, many would call this a "trigger object"--or, something placed out during the hunt with the hopes of luring in a spirit.

While Ghost Hunters may have left a few years ago, the teddy bear has remained in Room 204 (without the camera!).

Lynn twisted away from the mantle and went to use the restroom. Out in the bedroom, her daughters started to call out to Anne as they took Snapchats to send to friends.

"Girls, be nice to her!" called out Lynn.

And then something happened...

Though the girls' cameras were not trained on the fireplace itself, their echoing cries of shock captured Lynn's notice.

Lynn flew into the guest room, stuttering to a stop when she realized that the ball on the mantle was no longer on the mantle. No, it had gone flying off the mantle (though no one had touched it!) and landed in the center of the room. Seeking a rationale answer, Lynn grabbed the ball and stuck it next to the teddy bear again.

She tapped it, and waited to see what might happen when the ball moved.

It rolled along the mantle before dropping to the carpet below.

Lynn tried again. She positioned the heavy purple ball again between the teddy bear's legs, as she'd found it originally, and then she hit it with a little more pressure. Once more, the ball teetered along the mantle and fell. Though it rolled a little farther this time, the distance was still not as great as the first time.

It seemed that the ghost of Anne had come out to play, and the activity was not over just yet.

Before dinner, a friend of one of Lynn's daughters sat on the bed. She flicked the lamp light on. Flicked the light off. When she stepped away, the light began to flicker all on its own. "Maybe the bulb is loose?" Lynn said when the girls started to wonder if something might be wrong with it.

Shrugging their shoulders, they left for dinner. When they returned, they rechecked the light, but it would not come on this time. The reason?

It had been unplugged.

Was Anne actually visiting them? Had she thrown the ball and unplugged the lamp?

During the course of the night, sleep proved elusive. The girls could hear scratching at the end of the bed on the bed post, and then there was a strange clicking noise. The windows rattled and the doorknobs shook.

And all the while, Lynn and the girls tried to enjoy the paranormal performance they'd wanted so badly when they had booked the night at the 17hundred90 Inn.

The following morning at breakfast, the owner of the 17hundred90 Inn gathered everyone around and began to tell stories about Anne, the property's resident ghost. For Lynn, her daughters, and their friends, staying the night at the 17hundred90 Inn proved to be an experience they soon wouldn't forget.

When Lynn reachced out to us via Facebook, we couldn't help but ask her if she would ever return to the 17hundred90 Inn.

Her response? "Absolutely, we are already planning our next trip to Savannah."

Will Anne make a reapparance then? Time will only tell, but there's a very good chance that if you stay in Room 204, Anne's ghost might grant you with a spectral visit...

The ghost of a Voodoo Practitioner

The staff believes this is the ghost of a servant who used to serve the family who lived in the house. The woman in question, who's name I cannot track down, was believed to be a practitioner of Voodoo. If this is true, does her believe in the power of Voodoo help fuel the hauntings which are reported in the bar and kitchen area of the 17Hundred90? It certainly seems possible.

The 17Hundred90 Inn is located at 307 East Presidents Street in the Historic District of Savannah Georgia. You can also find it by locating the intersections of Presidents and Lincoln Streets.

Stay in one of Savannah's Haunted Hotels 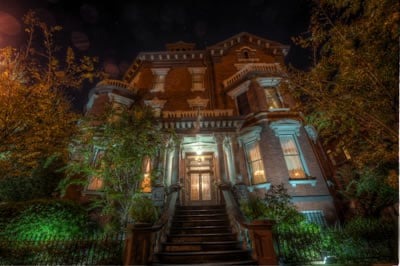 Luxury and Ghosts in a Hotel 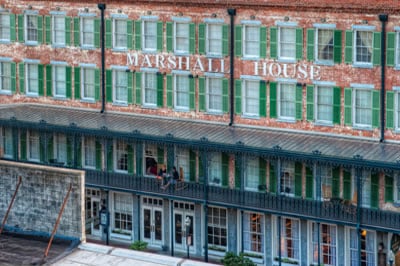 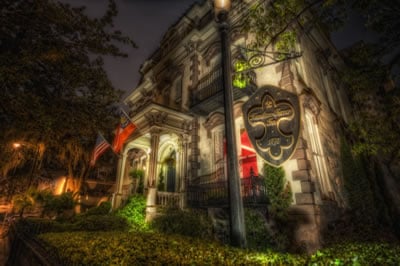 Get to know the ghosts of this Hotel