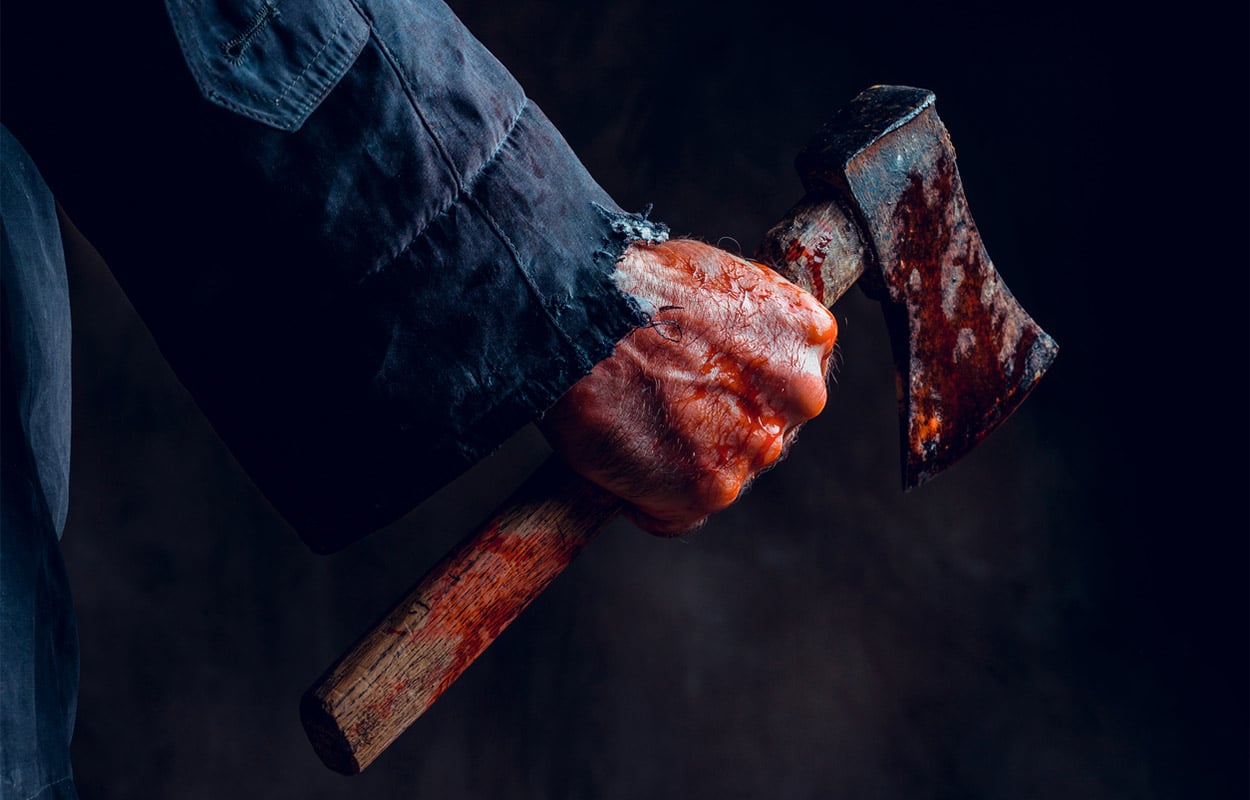 The Axeman Murders of New Orleans

He strolls down the street, his shadow slender and contorted in front of him. The click clack of his shiny, black Oxfords smack the cobblestone like the mule hooves and carriages of the French Quarter. Smiling and content, he glances around at the neighborhood filled with the sound of live jazz music from every direction. Singing a song that’s both lively and tragic, their notes carry through that Mississippi River breeze out onto the bayou and through the veins of this dark Crescent City. The windows of the Creole cottages and stately homes, adorned with their painted columns, colorful wood shutters, and petite gardens are peeled open… exposing themselves lustfully to the mysterious demon parading by.

He closes his eyes and takes a long, deep breath of fresh air…sigh…”I love me some jazz”, he says to himself in his deep, rich voice. Tipping his slouch hat at the passersby and giving them a confident nod, he says to himself “they listened, there will be no dark and damnable deeds tonight.” With images of his borrowed bloody axe flashing through his consciousness, he sets down his trumpet case, pulls out a fresh cigarette and matchstick from his breast pocket, cusps his hands, and lights it. He leans with one shoulder into a brick wall, puffing smoke rings into the damp air, and watches New Orleans pass by in all her ghastly glory.

Looking back on the week before, he recalls chipping away at the back door of the corner shotgun house in that silent Gretna neighborhood and kicking in the corner panel to reach in and unlock the doorknob, letting himself in. He walks slowly through the connecting dark rooms, pausing for a moment in front of the living room doorway listening for the faint sounds of sleep, careful not to drag the heavy, wooden axe along the floor and overthrow his momentum. The grasshoppers and frogs are chirping loudly outside, their soft but powerful hums like jazz notes he can sway his axe to. He approaches the bedroom door cracked open just enough to peer in and puts his ear to the painted wood panel, holding his breath. “Sleep” he whispers. He opens the door so silently and slowly as to not wake his innocent victims, that he smirks in complete satisfaction with himself. He taps his shiny, black Oxfords against the corner of the bedframe and raises his arms to strike. He flashes to a vision of the axe, dripping with fresh blood quickly coagulating as the drips become slower and thicker. He pauses for a moment and wonders if he should put the axe back where he found it, in the garden shed, or leave it next to the not-yet-cold family of corpses. Deciding to take it with him, he saunters to the icebox in the kitchen and pours a fresh glass of chilled milk. After leisurely gulping, he washes and puts away the glass, uses his sleeve to erase the white liquid from his lips, then cleans himself of the blood splatter strewn across his face and forearms with a dish towel from the kitchen sink. He puts the dirty towel inside of his trumpet case and walks out, closing the door behind him, and leans the rusty, dripping axe against the doorframe as a gesture of politeness that surely the police will find amusing. Tipping his hat as he leaves, he says to himself “Goodnight sweet angel of death.”

In the dark of night, the Axeman slays. He walks slowly through the crisp, early spring air of the city like a swampy sludge of the blackest fear. He knows what he has done and who called him to do it. A demon in the dead of night, his bloody work finished.

The Axeman of New Orleans

Thirty years after Jack the Ripper ravaged the East End of London with his sharp and bloody blade, the Axeman of New Orleans terrified an unsuspecting city to its core and caused widespread panic. He was perhaps the only serial killer since the Ripper who wrote mockingly to the media about his grisly ventures. Labeled as “America’s own Bayou Jack the Ripper”, the Axeman is known to have assaulted 12 innocent people (of which 5 were slain) in the Crescent City and its suburbs between May 1918 and October 1919. His modus operandi, a borrowed axe from his own victims, he bludgeoned them while helpless and sleeping soundly in their beds. Throats slashed, heads bashed in, and nearly decapitated were just some of the descriptions used in the police reports. Many homes were ransacked, but nothing of value was ever taken from the victims’ households, other than the non-permissive use of their own axes and the lives it violently took. Most of the victims were of Italian descent and owned Italian grocery stores, this led to the belief that the killer was a part of the Mafia. The dreaded and mysterious axeman of New Orleans and his violent agenda disappeared in the autumn of 1919 as suddenly and hastily as they arrived. The fearful midnight murderer was never apprehended and his identity remains a mystery to this day.

“Found Dead in Bed”: The Victims of the Axeman

Many of the Axeman’s victims were Italian grocers. Did he have prejudice against these immigrant families? Did they offend, ridicule, or hurt him in some way? Or was it all just random acts of violence? The world may never know. We do know that those who survived his attacks were left with a ghostly vision for the rest of their lives of a dark man wielding a heavy axe over their beds and reining his strength down upon their sleeping bodies.

In March of 1919, the New Orleans-based Times-Picayune newspaper received a taunting letter from the supposed Axeman. He revealed his love of jazz music and propositioned the citizens of New Orleans to “jazz it” in their homes the eve of St. Joseph’s day (a major holiday for Italians) or “get the axe.” The letter reads:

They have never caught me and they never will. They have never seen me, for I am invisible, even as the ether that surrounds your earth. I am not a human being, but a spirit and a demon from the hottest hell. I am what you Orleanians and your foolish police call the Axeman.

When I see fit, I shall come and claim other victims. I alone know whom they shall be. I shall leave no clue except my bloody axe, besmeared with blood and brains of he whom I have sent below to keep me company.

If you wish you may tell the police to be careful not to rile me. Of course, I am a reasonable spirit. I take no offense at the way they have conducted their investigations in the past. In fact, they have been so utterly stupid as to not only amuse me, but His Satanic Majesty, Francis Josef, etc. But tell them to beware. Let them not try to discover what I am, for it were better that they were never born than to incur the wrath of the Axeman. I don't think there is any need of such a warning, for I feel sure the police will always dodge me, as they have in the past. They are wise and know how to keep away from all harm.

Undoubtedly, you Orleanians think of me as a most horrible murderer, which I am, but I could be much worse if I wanted to. If I wished, I could pay a visit to your city every night. At will I could slay thousands of your best citizens (and the worst), for I am in close relationship with the Angel of Death.

Now, to be exact, at 12:15 (earthly time) on next Tuesday night, I am going to pass over New Orleans. In my infinite mercy, I am going to make a little proposition to you people. Here it is:

I am very fond of jazz music, and I swear by all the devils in the nether regions that every person shall be spared in whose home a jazz band is in full swing at the time I have just mentioned. If everyone has a jazz band going, well, then, so much the better for you people. One thing is certain and that is that some of your people who do not jazz it out on that specific Tuesday night (if there be any) will get the axe.

Well, as I am cold and crave the warmth of my native Tartarus, and it is about time I leave your earthly home, I will cease my discourse. Hoping that thou wilt publish this, that it may go well with thee, I have been, am and will be the worst spirit that ever existed either in fact or realm of fancy.

12:15 o’clock Tuesday evening March 18th, the residents and revelers of New Orleans jazzed it like they’ve never jazzed it before. Restaurants, clubs, and bars were overflowing with patrons who felt their lives depended on it. Every musician, whether they had been booked before or not, was contracted. Every neighbor, friend, family member, and stranger were gathered together surrounding the jazz trios and full bands playing their hearts out that night. Every saxophone, trumpet, trombone, drum, clarinet, violin, and piano in the city was humming a tune just for the Axeman’s infatuated ear.

Inspired by the letter to the Times, one auspicious composer named Joseph John Davilla claimed to have composed “The Mysterious Axeman’s Jazz (Don’t Scare Me Papa)” while waiting for the Axeman. A “bit” of a self-promoter, by that Thursday morning he was offering the sheet music for sale to the public at a price. His business maneuver was so shrewd that many thought he could have written the letter himself as part of a marketing ploy to further sell his composition.

On Wednesday March 19, St. Joseph’s Day, the Times-Picayune printed an illustration depicting a family frantically playing jazz music from their piano with looks of sheer terror on their faces as they waited for the Axeman to pass over the city. The article described all of the jazzy festivities across the metropolitan area and the fact that the Axeman did not strike that evening. Mr. Davilla would later use this very illustration as the cover of his now well-known, published sheet music.