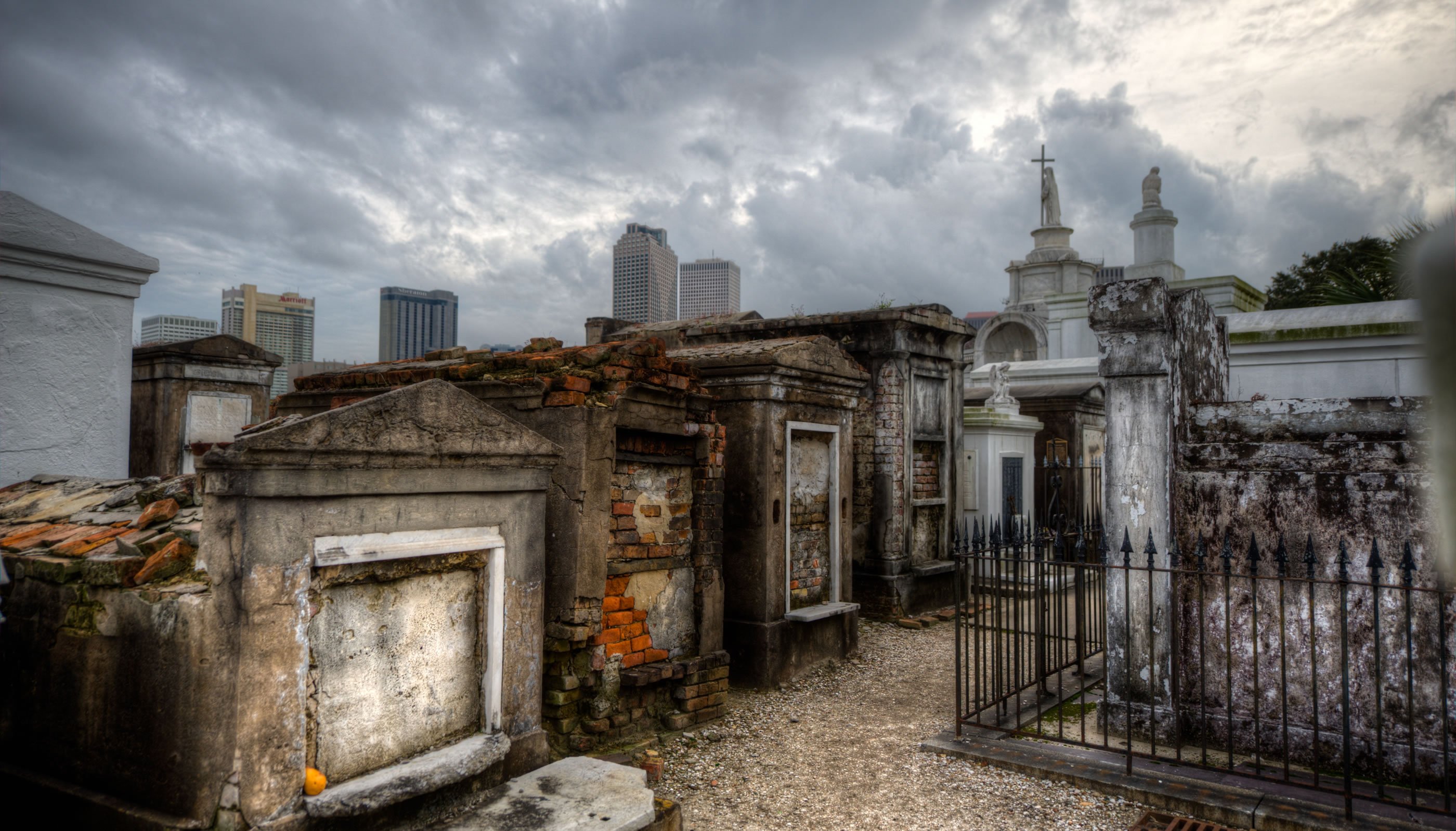 It's also considered one of the most haunted cemeteries in all of the United States. In the span of just one block, this burial ground holds over 700 tombs and over 100,000 of the dead--and counting, as it is still an active grave site. Is it any surprise that it is rumored to be very haunted? For over 200 years, there have been reports of people having run-ins with the ghosts which call St. Louis Cemetery #1 home.

Even the appearance of the cemetery bolsters the illusion of days gone by, to say nothing of the eerily quiet atmosphere that descends over the St. Louis #1 as dusk falls and night begins its reign. Its age is prominently displayed by the character of the cemetery: broken shells and cobblestones, dredged from Lake Pontchartrain and the Mississippi River, form the alleys, and the crumbling, chipped above-ground crypts hold the dead. The disorderly layout of the tombs and burial plots are a labyrinth that only ghosts of the cemetery are able to navigate. Many of the family tombs bear cryptic symbols, as well as signs of vandalism and old-age--it is no wonder that many people feel a ghostly presence when visiting New Orleans' oldest cemetery. And it is no wonder that many movie productions practically ache to film within the cemetery's white walls, although Easy Rider and Interview With a Vampire are perhaps the most famous films shot inside by far.

A crumbling appearance dusted with age, St. Louis Cemetery #1 earned the nickname "the Cities of the Dead" by the famed author, Mark Twain. A more appropriate name has never been given . . . but which ghosts still call St. Louis #1 home? And which ghosts are still making their presence known today?

Why is St. Louis Cemetery #1 Haunted?

Good question. After all, we have found that despite popular belief, cemeteries tend not to be very haunted. After all, when you die, we're sure that there are at least one hundred more places to hang out than the cemetery in which you are buried. Despite this, for almost two hundred years, ghost stories have surrounded St. Louis Cemetery #1. People have had encounters with the dead who are still buried inside the stone walls of this historic cemetery.

So, what can explain the number of ghost sightings in St. Louis Cemetery #1? The biggest reason is that people want to see ghosts there. It's a facet of human nature that if you want to see something badly enough, you're probably going to see it, even if it's not actually there. Add the creepiness factor, and bring in this hsitoric, dilapidated cemetery and you have ghost sightings.

Once we eliminate any paranormal experiences that can be chalked up to overactive imaginations, we still have a large pool of ghost sightings and paranormal experiences to look at. But before, we do that - who are the ghosts still lingering in this haunted cemetery? Let's take a look at some of the most famous people to haunt these hallowed grounds.

St. Louis Cemetery has been around for almost 300 years. In that time, untold numbers of peole have been laid to rest here. So, when trying to answer the question of who is buried at St. Louis Cemetery #1, you'll find yourself trying to answer a question which is almost impossible to answer. It could be almost anyone. However, there are a few ghosts which are seen ehre more often than others. In these cases, we have a pretty good idea who they are.

The most famous ghost which is seen within St. Louis Cemetery #1 is that of Marie Laveau. Commonly known as the Voodoo Queen, Marie was born in 1801 and would become the most revered (and, at times, feared) voodoo practitioner in New Orleans history. She practiced fortune telling, the occult and worked with herbal remedies. As awareness of Marie's skills and power spread throughout the population, her fame grew and gained unimaginable strength. Legend has it that she knew all of the secrets of all levels of society. No doubt she did, as hoards of people fawned over her, begging for her to help them with their problems or to assist them in their own rituals and spells. She was, quite literally, the 'go-to' voodoo practitioner in New Orleans during the 19th century.

The ghost of Marie Laveau has been spotted in many locations throughout the French Quarter, including meandering down the street past her old house at 1022 St. Ann Street. She'd most recognizable by the red and white turban tucked around her hair, and by the brilliantly colored clothes she wears--but even as people follow her, she disappears--vanishes--right from sight. Within the cemetery, individuals have reported seeing the ghost of Marie Laveau walking through the tombs. And for those willing and risking to disregard her or her beliefs or religion, reports exist of people being scratched, pinched or shoved down to the ground. Marie, as they say, is not always deemed the friendliest of spirits.

Perhaps most interesting of all is the practice of marking the tomb of Marie Laveau with 3 x's while asking her for a favor or making a wish. Legend (truly, just legend) has it that if the wish is granted, the person is required to return and place a gift at the site of her tomb. Unfortunately, this has led to a lot of vandalism, including two instances when the entire tomb was painted a Pepto-Bismol pink. The result was the Archdiocese of New Orleans closing the cemetery off to the general public after March 2015. Today, only people on licensed tours may proceed inside.

Even the change in policy has not stopped guests from experiencing something otherworldly at Marie Laveau's tomb. Visitors have reported all sorts of paranormal happenings while trying to interact with the now deceased voodoo queen. Feelings of being touched, becoming unexplainably ill, and hearing voices emanating from inside the tomb have all been said to happen on occasion.

As a courtesy, if you do visit the tomb of Marie Laveau, please do not leave marks of any kind on it. It is vandalism and must be stopped in order to preserve this historic yet haunted location in New Orleans.

Plus, knowing what Marie is capable of even after death--are you willing to face her ghostly wrath?

Other Ghosts of St. Louis Cemetery No. 1

The Spirit of Henry Vignes

The story of Henry Vignes is a tragically sad one. As a sailor during the nineteenth century, Henry Vignes had no true home to speak of. He was a nomad, traveling here and there, sailing on the high seas--in New Orleans, he made his home at a local boarding house. But he was constantly worried about his important papers while away from the Crescent City, so much so that before departing on another voyage he asked the owner of the boarding house to keep his papers if he died. These papers included his family tombs.

The owner of the boarding house promised Henry that all would be well--"You have nothing to worry about!" she exclaimed upon his departure--but all was not well. While Henry was at sea. the owner sold Henry's family tomb. He discovered her treachery when he returned to New Orleans. Poor Henry Vignes was never able to rectify the problem, legally or on his own terms. Shortly after his return, he fell ill and died. But as his tomb had been sold, there was no money to build another--Henry's body was thus buried in an unmarked grave in the pauper's section of St. Louis Cemetery #1.

Although his body was laid to rest over a century ago, the ghost of Henry Vignes is still seen wandering the cemetery. He is described as being tall with blue eyes; so corporeal does it appear that visitors of the cemetery have actually spoken with Henry's ghost. Strolling up to tourists, the apparition asks if they know where the Vignes tomb is located for he is having trouble finding it himself. Allegedly, Henry's ghost has even turned up to funerals, appearing behind the grieving to ask if there might be any more room in the tomb for him!

His apparition has been caught on camera, and so has the distinct sound of a male's voice on an EVP, proclaiming, "I need to rest!"

For the ghost of Henry Vignes, it does not seem that rest has ever come easy or that it ever will . . .

Another lost ghost haunting St. Louis Cemetery #1 is that of Alphonse. Like Henry Vignes, it seems that the spirit of Alphonse is only hoping to find a place to rest his soul.

His spirit has been known to take a visitor's hand in his as he pulls them to a stop. Smiling widely, he asks them to bring him home--but what home is it that he speaks of? That remains unknown, though his apparition has been seen gathering the flowers off of other graves and placing the offerings on his tomb. It is thought that Alphonse may have been murdered or betrayed by someone of the Pinead family, for every time a visitor steps near the Pinead family tomb, Alphonse appears to warn them to stay away.

What story exists there? It seems that it will forever have to remain with Alphonse, the ghost who only wants to find his home.

Upon visiting New Orleans, a trek over to St. Louis Cemetery #1 is well worth your time. Visitors have witnessed phantom figures, including the ghosts of Civil War soldiers and perhaps even the victims of the yellow fever epidemics that killed thousands of New Orleanians almost every summer.

The ghosts of St. Louis Cemetery #1 are numbered in the hundreds, which only makes sense because tens of thousands of people have buried in the lot. Many of the identities of the ghosts which haunt the cemetery will never be known or even discovered, but as they stalk the labyrinth of tombs in the night and even in the day . . . It's safe to say that this legendary cemetery has earned its spots as one of the Most Haunted Burial Sites in all of America.

Do you want to visit yourself? Remember that visitors must be accompanied by a licensed guide, and luckily enough, we offer daily cemetery tours for your convenience.

Get to know New Orleans' Most Haunted Cemeteries

Where a ghost dog is seen