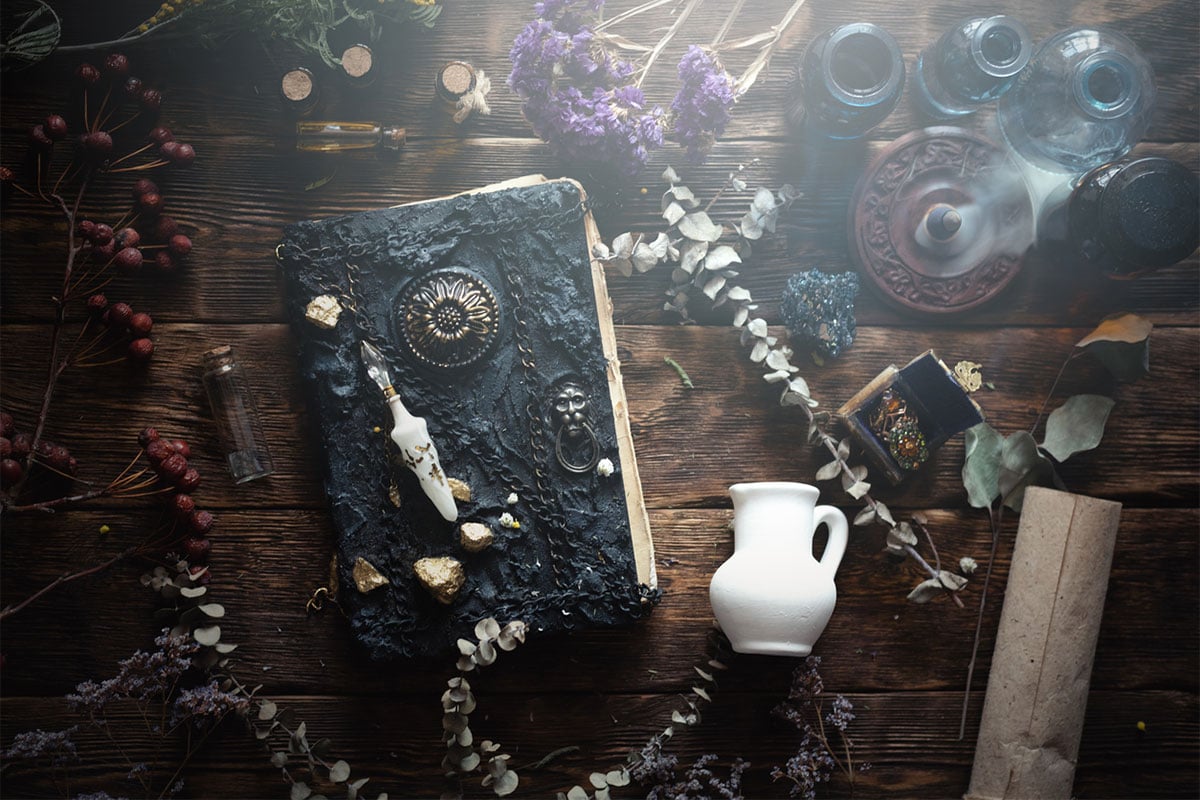 There is no shortage of supernatural, mystical, paranormal, Voodoo, and what could be called "spiritually eccentric" in New Orleans. The City's history is rich in diversity and challenges, all of which are reflected in her tapestry of culture. When you begin to look at Voodoo and traditional European Witchcraft, the similarities are astounding, even though their foundations are worlds apart.

There are witches in New Orleans. All kinds of witches. American Horror Story has made sure that The Crescent City is up there next to Salem, Massachusetts when it comes to witchery history and casting spells. But the girls honing their craft at Miss Robicheaux's Witch Academy in AHS aren't exactly an accurate depiction of what has been brewing in the City's cauldron for centuries.

Marie Laveau is undoubtedly the most famous witch to have called New Orleans home. To be more accurate, Ms. Laveau was known as The Voodoo Queen. Is there really a difference between Voodoo and Witchcraft? There is. But there are some glaring similarities, as well. It all comes down to the details, different words with similar meanings, tweaks, and twists to rituals and practices. And even though the roots are continents apart, the intention through worship and service are the same.

It's a Voodoo Thing

Louisiana Voodoo is its own thing. It is not Hoodoo or Haitian Vodou, but just like most beliefs and practices, they share a foundation. Their differences are adaptations influenced by the culture and communities that raised their spiritual leaders.

Voodoo landed in Louisiana during the colonial period. The enslaved persons from West Africa and sub-Sahara brought their culture and beliefs to Louisiana. Their practice included working with roots and herbs, creating and using charms and amulets, as well as honoring and worshiping their ancestors. These practices, combined with Catholicism (the Catholic Church had a considerable part in colonizing Louisiana), became the core of Louisiana Voodoo.

A Voodoo practitioner was basically combining ingredients and rewriting recipes using the traditions of their ancestors and the rituals of Catholicism. You might find the powder of a root combined with herbs and holy water under the watchful eye of a crucifix and blessed with sacred incense. Many times Jesus Christ would be called upon for the final evocation in the ritual. The blending of African Voodoo and Catholicism is what made the practice palatable for many of the European transplants and first-generation Louisianians.

Ancestors and spirit guides are essential elements in Voodoo. The reverence and respect for elders was brought over from the West Africans, which was merged into the Catholic practice of praying through saints. It is believed that Louisiana Voodoo adopted many of the saints as their own, using saints and spirits in their practice. Often times, these spirits are conjured through music, dance, and chanting, with the intention to bring the spirit through the individual, a kind of welcomed possession.

Voodoo queens, the female leaders in the religion, are powerful influencers and thought of as guides and healers. These women lead spectacular ceremonies with ritual dancing, song, and prayer to worship their deities, their ancestors, and their Loa (spirit guides). Through their spirit guides, they hold the answers to problems, the recipes for healing, and the charms for protection. They were, and still are, counselors, shamans, life coaches, and spiritual crusaders for those who are lacking in faith or in need of guidance.

Witches have historically, and culturally, gotten a bad wrap, until recently. We are beginning to see a resurgence of folks coming out of the broom closet. The Age of Aquarius was the last time we really saw a rise in esoteric arts. Blame it on Anton LaVey's Church of Satan or Stevie Nicks' Gold Dust Woman, either way, 1968 seeded more than the summer of love. And it wasn't just the West Coast exploring their religious freedoms.

New Orleans was about to expand the City's witchy reputation publicly and not only acknowledge Voodoo as a religious practice, but officially recognize Witchcraft. Mary Oneida Toups set the witch wheels in motion in 1972. The State of Louisiana chartered Mary, and gave her a Certificate for The Religious Order of Witchcraft, officially recognizing Witchcraft as a religion. The ordained High Priestess was now the leader of an incorporated organize religion with nonprofit status. America's witches had come a long way.

In 1910, not that long before The Religious Order of Witchcraft got their State issued practicing rights, a woman was arrested and convicted of Witchcraft. She was caught in a neighbor's barn supposedly casting evil spells on a farmer's cows. It's safe to assume that the witchy woman was not practicing her incantations in or near New Orleans. She would have had clients lined up for her services in The Bayou, providing her spells achieved their goals.

Bottom of the Cup Tea Room opened their doors in the French Quarter in 1929. Back then, and for most of the 1900s, it was illegal to take money for fortune-telling, so they would charge for tea and biscuits, and your future was "on the house." It's rumored that politicians from all over the state would stop into Bottom of the Cup Tea Room for a little mystical guidance before election season.

It's no wonder Mary Oneida Toups found her way from Meridian, Mississippi to the Crescent City. She knew she'd be welcome in the home of Voodoo, tea leaves, and soothsayers.

A Witch in New Orleans

White magick, black magick, green witch, swamp witch, the list is long and diverse, but none are more witchy than the other. New Orleans has a lovely menagerie of witches, all welcome to worship, practice, cast, heal, and read to their mystical heart's desire. Priestess Mary Oneida Toups knew she would find her place in the arms of The Big Easy.

Priestess Mary was a practicing White Witch, white, meaning that she didn't practice Black Magick or the "dark arts" - though there are articles written by members of her "inner circle" that claim something different. In 1971, she opened the Witch's Workshop at 521 St. Philip Street in the French Quarter. She sold candles, sprays, oils, and even a few things that were a bit more specific, like bats' hearts, which are said to be great for those who like to gamble. In a 1972 interview with journalist Horace Sutton, she explained, "it's important to sell people the whole dried bat so they can be confident it's the real thing and not some old chicken heart." A witch with integrity.

In the footsteps of Marie Laveau, Priestess Mary held ceremonies on the shores of Lake Ponchartrain. The City of New Orleans granted her a permit to conduct rituals and ceremonies in City Park, much like her predecessor, Marie Laveau, did one hundred years earlier. And she was extremely particular who could join her coven, she wasn't interested in "drug-abusing hippies" that had found their way to an alternative lifestyle. She told the Opelousas Daily World, "there are high-caliber witches," and those were the ones who were a part of her Order.

If you are an American Horror Story fan, you may have caught a reference to Mary during the Coven season. And if you don't remember her name being mentioned, you surely remember the infamous Madame Delphine LaLaurie. Mary held a seance at the LaLaurie Mansion and claimed to make contact with the infamous and notorious Madame LaLaurie. Today, tickets to be a part of a Madame LaLaurie seance would sell out in record time.

To many, Mary Oneida Toups is the most powerful witch to have practiced in New Orleans. She educated herself in the many religions of the world, interpreting and applying scripture from religious texts, including the Bible, into her studies and practice. Her Western Ceremonial Magick was steeped in tradition, as well as heavily influenced by Aleister Crowley's Hermetic Order of the Golden Dawn. But at the core of her beliefs and craft, she promoted actively being your best through knowledge, and harnessing your power for good. Even if her means of "good" could be perceived as on the fringe.

In 1977, a mummified severed head was found in a trash bin of her "abandoned occult shop." When she was questioned about the head, Mary explained that she was a practitioner of Egyptian magick and a witch; she threw the head away because she could feel it had "bad vibrations." Obviously, Mary wasn’t concerned with consequences. Perhaps she “knew” there would be none.

Mary Oneida Toups passed away in September of 1981. Good luck finding her obituary or burial information. Current members of New Orleans Religious Order of Witchcraft say she was taken at the young age of 53 by a brain tumor. Famous New Orleans musician and "The Night Tripper" himself, Dr. John, claims in his autobiography that Mary died from her enemies poisoning her. Like a true witch, she left this world with a little mystery, a little curiosity, and a lot of reverence.

If you're planning a visit to New Orleans and hoping for a little witchery, you can find quite a few shops in the French Quarter, as well as peppered around the City, offering everything from spell books to card readings, and even herb and root mixtures for incantations. Mary's old place on St. Philip is currently Hands of Fate. There, you can arrange to have your cards read, palms read, or spend some time with a medium if you are hoping to communicate with lost loved ones.

And if you really want to dive into the craft, New Orleans hosts an annual Witchcraft Conference, Hex Fest, that happens in August every year. Local and visiting witches offer workshops, discussions, and classes on their practices and rituals. And there are vendors from around the country selling witchy goods and services.

The history of Witchcraft in New Orleans is rich and diverse, just like the City itself. Whether you are interested in Voodoo, Alexandrian Witchcraft, modern Pagan practices, or Western Ceremonial Magick, you can find a coven and resources in the City. And if you're not interested in conjuring or casting, it's still a good idea to thank your ancestors and light a white candle when you're feeling grateful.