The Ghosts of Terrell Castle, AKA The Lambermont 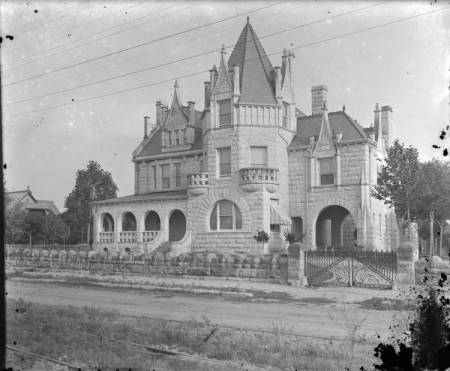 The Ghosts of Terrell Castle

A place with two names? For a castle such as this property at 950 East Grayson Street, it’s totally plausible that two names are entirely necessary.

The Lambermont was built for Edwin Holland Terrell, a lawyer, statesman and ambassador to President Benjamin Harrison, who asked English architect Alfred Giles to build him a castle. As all castle-builders do, Terrell sent Giles to Europe to take note of all the beautiful chateaux dotting the landscape of Belgium and France. Tasked with taking the finest features of Europe’s grandest architecture, Giles returned to Texas to begin building for Terrell and his family.

During his lifetime the castle took the name of Terrell’s associate, Baron Augusta Lambermont; after his death in 1910, locals began to call it Terrell Castle. The nickname stuck until only recently, when the latest owners decided to revert back to the property’s heyday.

12,000 sq.ft, nine fireplaces, galleried porches—Lambermont is certainly a sight to see, and must have been a great source of pride for Terrell. That is, until his death.

Terrell had contracted syphilis, and as syphilis is wont to do, Terrell’s last years were filled with confusion and the onset of dementia. The symptoms of the disease ravaged his body so badly, that in June of 1910, Terrell saw no other option but to end his suffering.

In the master bedroom, he attempted to take his own life with a shot to the head. He missed, skimming the curve of his skull. It was ten long days before Terrell took his final breath, whereafter his second wife Lois held the funeral on the first floor.

Lambermont’s fair share of tragedy did not end there. During World War II, the castle was cut up into separate apartments to make room for the many military families stationed at Fort Sam Houston up the road. One woman who lived there at the time visited the castle much later in life and asked the former owner if she could take a peek inside her old home.

“Are the bloodstains still there?” she asked.

The owner was at a loss for words, as the woman launched into a gory tale of jealousy and broken love. Allegedly, a man and his wife had lived on the third floor during World War II. One day, the soldier came home to find his beloved wife with another man. Anger coursing through his veins, he killed his wife’s lover before pushing his wife over the stairwell. She plummeted three stories to her death below, where the bloodstains remained for a long while.

If rumors are to be believed, another tragic death even proceeded Terrell’s himself. During construction of the property, Alfred Giles had hired a contractor who knew people who knew people. Those “people” were government employees, who he utilized despite the government not giving him approval. Reportedly he was found out, and instead of answering to Uncle Sam, he chose to fling himself off the upper balconies of the castle.

As I said, tragic.

Like the Grey Moss Inn, another haunted hotspot in San Antonio, Lambermont has also been professionally investigated, though many employees and guests have ghost stories of their own. One couple staying at the property watched in shock as their mini-TV went sailing off the table onto the floor by an unseen force. Housekeepers have heard footsteps padding about the hallways, sometimes so loudly that they mistake the phantom footsteps as one of their fellow coworkers’. There are the sounds of ghostly children playing upstairs, and the scent of cigar smoke permeating the library.

It goes without saying that the Lambermont is haunted, but just how haunted? That’s for you to find out. Although most commonly rented out for private events or weddings, guests can also book a room to spend the night at Texas’ most beautiful castle.

Don’t worry, the ghosts come at no charge to you. (Though if this is a good or bad thing remains to be seen

Are you hoping to visit the haunted Lambermont? There's good news and bad news for you. The good? You can visit this haunted location. The bad? It might cost you an arm and a leg, as it is presently a wedding venue. Doesn't mean we don't wish you luck!