The Ghosts of the Menger Bar in San Antonio 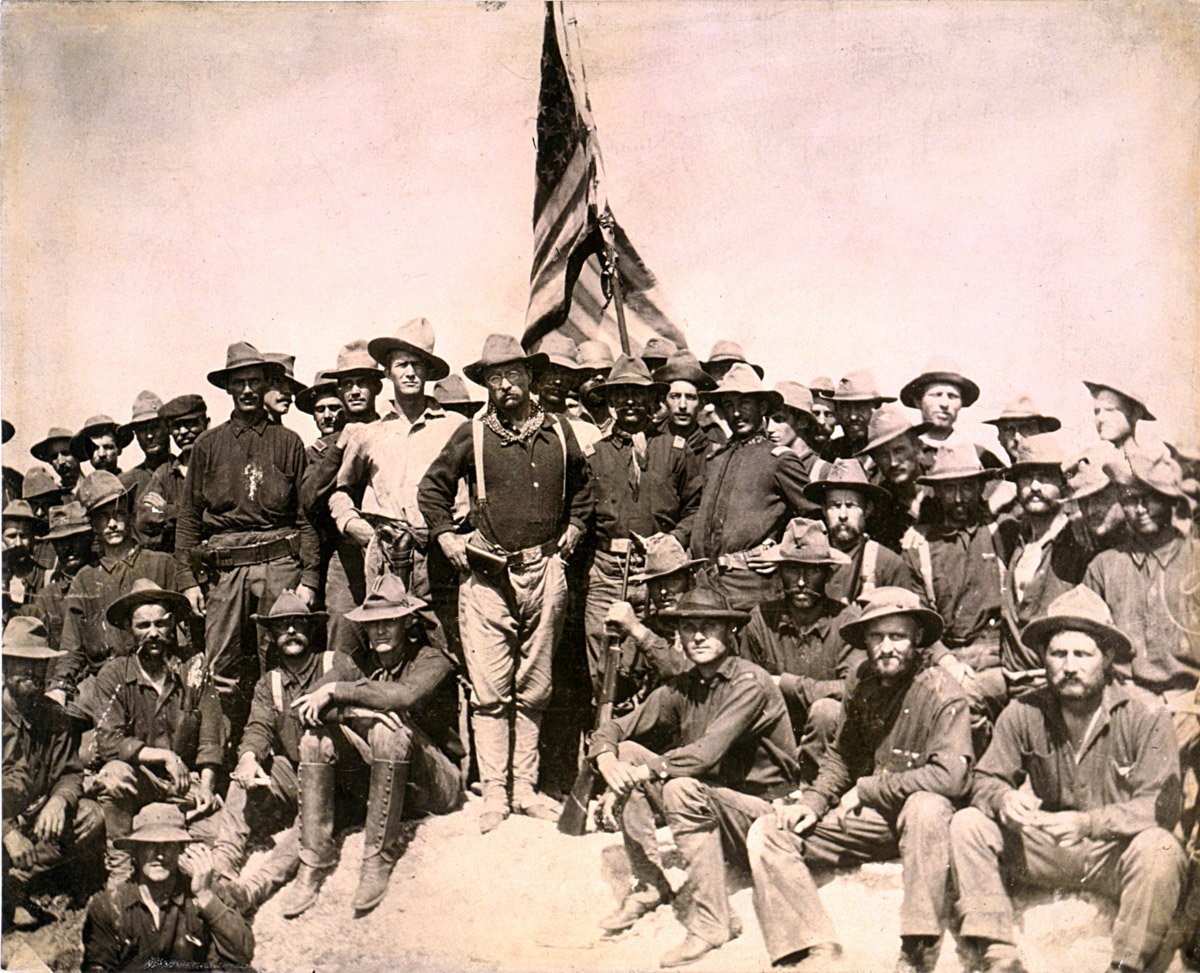 The Ghosts of the Menger Bar

The Menger Hotel Bar is the most historic saloon in San Antonio, and lies in the shadows of the Alamo. The Menger Bar is renowned as the location where Theodore Roosevelt recruited many of his famous Rough Riders in the spring of 1898. In preparation for the Spanish-American War, he used the bar as his unofficial headquarters, as well as an induction station. Although he was only second in command, his flamboyant persona and penchant for publicity made him the face of the Rough Riders and the Spanish-American War. The men actually only had three weeks of training before they left San Antonio for Tampa, and ultimately onward to the Island of Cuba. But, the rowdy cowboys from San Antonio were up to the challenge, and for that, it’s easy to see why the Rough Riders have left a lasting impression.

It is said that the Menger Hotel is haunted by numerous lost souls, and the Menger Bar is no exception. Upon entering the establishment, eerie feelings are almost certain, ghostly sightings are always a possibility and if you’re lucky, you might even see the spirit of Teddy Roosevelt.

The History of the Menger Hotel Bar

The five-story, high-class Menger Hotel was San Antonio’s first hotel and one of the city’s oldest businesses. William Menger (a German businessman) opened the Menger Hotel on February 1, 1859. where it was constructed on the site of Menger′s Brewery (the first brewery in Texas). Some of their most notable guests include thirteen different presidents (Obviously Teddy), Sam Houston, Babe Ruth, Mae West and Bob Dylan. William Menger died at the hotel in March of 1871. After his passing, his widow, Mary, and son, Louis William, took over management duties. When Hermann Kampmann later took over management at the Manger Hotel, he supervised the creation of a new bar (allegedly next door to an undertaker). And, interestingly enough, the Menger Hotel bar is a replica of the pub in London’s House of Lords Club.

On November 11th, in the year of 1890, Jim Draper was killed in the Menger Hotel Bar by H. H. Childers (who would go on to personally represent Woodrow Wilson in his 1912 presidential campaign). At the time Childers was an insurance agent, and visiting San Antonio from Austin. At trial, Childers was sentenced to twenty-five years, but on his appeal the case was reversed and he was free to go (that’s the Old West for you).

Another incident occurred when Special Police Officer John Magner walked into the Menger Hotel Bar on the 25th of May, 1897. John took a seat at a table, calm as calm can be. Then with a cool hand, he rose a gun to his head and pulled the trigger— in front of every other patron at the saloon. He would later die at the hospital.

You can still spot a bullet hole in the wood of the barroom, although some say this was not the work of Childers, Magner, or some unruly cowboy, but instead the damage was done by the barrel of Teddy Roosevelt's gun.

The Ghosts of the Menger Hotel Bar

The ghost sightings at the Menger have been well-documented, one of the better known sightings is that of Richard King. Richard King was the founder of the King Ranch (with a name like that, go figure), and he just so happened to be staying at his personal suite in the hotel at the time of his death. Another infamous spirit that has been spotted time and time again is a lady dressed in all white (even after Labor Day). The lady in white is a type of ghost that can be found all over the country in many different haunted places. There are several beliefs behind the “Lady in White” phenomenon, but the most sensible explanation is that since colored garments were a luxury reserved for the rich, the plain white dress was a staple for most of the women around the country.

Paranormal activity occurs frequently at the Menger Bar, activity such as, things inexplicably moving from one place to another, glasses flying across the room, light anomalies, strange noise, EVP audio (electronic voice phenomenon), cold spots, apparitions and even physical contact. There have been paranormal investigations in this dim Victorian style bar. As it’s said, places with lots of historic activity (like Teddy and his Rough Riders), tend to make for great readings. The Menger grounds, host numerous souls, that have been spotted in it’s storied bar. You may take this with a grain of salt, but if you were to talk to the staff face to face, you would see the genuineness in their eyes, and it would be in that very moment, that you’d realize, there is something, something to the hauntings at the Menger Hotel Bar.

The Ghost of Teddy Roosevelt

One of the Menger Hotel Bar’s most famous ghostly guest is the spirit of former President Theodore Roosevelt (dressed in his old military uniform). Throughout the years, patrons and employees have reportedly seen Roosevelt sitting at a table having a drink, just as he did so many years ago when he was recruiting the hard living cowboys of San Antonio. Story has it, Roosevelt, would sit in the barroom, waiting for cowboys to come in, he would offer them free drinks as he gave his recruitment speech. The next morning, said cowboy, would wake up hungover and to the realization that he had joined the Rough Riders cavalry brigade.

A famous story told around the bar, involving the ghost of Teddy, has him appearing late one night, just after closing and startling the new janitor. Teddy gestured to the young man, who promptly ran towards the exit. When he reached the door, he found that he had been locked in, as he frantically tried to unlock the door, Teddy’s ghost quietly sat at the bar and observed the young man in his panic state, dropping the keys and fumbling with the lock. The young man, made so much noise, the night manager and security guard overheard him and rushed to help the lad out. Distraught, he explained to them, that he had seen a ghost, the ghost of Teddy Roosevelt. The young man, not quite up to the task of dealing with the spirits, quit his job and never returned to the Menger bar (or hotel for that matter).

During one investigation at the bar, shadows were seen and voices were heard. One of the recordings may give credence to the lumberings spirits of Teddy and the Rough Riders, the voice on the recording was caught cowboying out “Get your horses.” The reason why this may validate the claim, is that, on at least one occasion, Teddy actually rode his horse into the famous bar to inspire men to join the calvary.

There are other visible entities that have appeared at the bar as well, both residual hauntings (glimpses of moments from the past that continue to replay) and intelligent hauntings (when an entity responds directly to the living.) Here’s an example of a residual haunting at the bar, one person claims to have seen two young boys, dressed like extras from the set of Newsies (undoubtedly a vision of the past). As for, intelligent hauntings, it is said that the keys to the liquor cabinets have been known to vanish from sight (perhaps the work of a prohibitionist ghost).

Sometimes, when people take photos in the bar, a little girl will appear in the background of their photos.

Other similar experiences: “We discussed that it might be haunted… you can see ghosts in the mirror behind the bar. So, I took a photo of myself in the mirror and came up with two “somethings” in the image that were not behind me. Nobody could figure what they were.”

Another person took a photo of a ghost sitting in the bar, she explains “I was right next to it, the feeling in the room was so thick, but awesome, just one of the many memories of that weekend.”

Apparently the bar also houses the spirit of a 1970s playboy. As the story goes, a couple was in the bar late one night, the husband was off to one side, waiting for his wife. Just then a gentleman dressed quite dapperly entered the bar, he began walking straight towards the husband’s wife with his playboy grin. The husband took notice of this man approaching his wife, and intercepted the stranger, but before the husband could say anything, the man vanished before his eyes.

This vanishing gentleman was again spotted at the bar, back in July of the year 2004. A women tells of the encounter, “there was no one in there but us. the bartender waited on us—there was a man, wearing a double-knit suit (totally 70’s), drinking a cognac (july in s.a.). he stared at us, and the bartender never acknowledged this man. He then faded away before our eyes.”

The vanishing gentleman isn’t the only spirits stirring up emotions at the bar. It was reported that one evening, “something” threw an ashtray clear across the bar. Apparently a spirit was jealous, when a waitress favored conversation with a living person over it’s own spectral form (“I will not be ignored, Dan!” Well, I guess in this case it should be Danielle).

Much of the area around the riverwalk and Alamo pander to tourists with lots of neon, wax museums and corporate restaurants. The Menger is a breath of fresh air, an authentic bar and hotel that are almost as old as the Alamo itself. The small bar, feels like old San Antonio, with dark wood, old filament-style light bulbs, lots of old photos of Teddy Roosevelt and a giant stuffed Moose head too. The hauntings at the bar are common knowledge around town, and an attraction for paranormal enthusiasts. There’s a good chance, on any given night, a small group of people will gather in the corner of the bar, using a Ouija Board, attempting to communicate with one of the many reported souls who still reside in the Menger Hotel Bar.

Did San Antonio breed violence, or was San Antonio the victim of the lawlessness accustom to the Wild West? To find the answer you must experience San Antonio for yourself. If you’re interested in learning more about San Antonio’s past, and the Menger Hotel Bar, please consider taking our Ghosts of Old San Antonio Tour

One of the oldest, and most haunted buildings