The Ghosts of the Chinese Graveyard in San Antonio 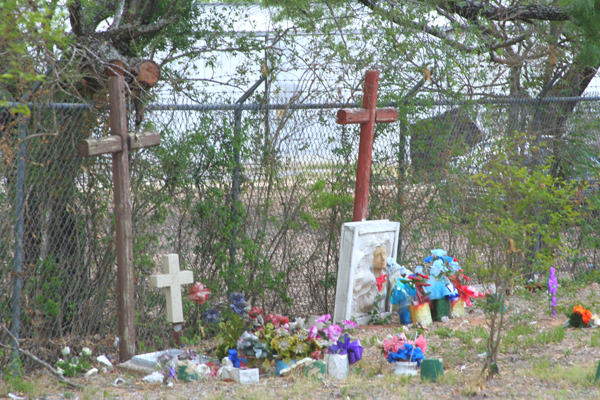 If you ever find yourself in the south side of San Antonio, driving down the lonely street of South Zarzamora, keep your eyes wide open for a small cemetery virtually forgotten by time. This cemetery is the Chinese Graveyard, also known as the Loma China Cemetery and the Guzman Burial Ground.

As you near the desolate graveyard, you'll find perfectly squared white signs posted on trees, with red lettering that reads "No Witchcraft" and "Keep Out". Another sign warns, "Never Mind the Dog, Beware of the owner" imaged on the sign is a hand holding a gun. So, needless to say, but say I will, the Chinese Graveyard is a place that you enter at your own risk.

In a city filled with the weird and downright strange, San Antonio's Chinese Graveyard takes the oddity cake. Legend has it that if you drive to the cemetery at night, parking just near the front, with your car completely shut off and windows rolled down, you may have a paranormal experience. Supposedly, if you flash your lights off and on five times, voices will begin emanating from the beyond, and some have even seen a tall white apparition floating through the grounds.

The Legend of the Chinese Graveyard

Not much is known about the origins of the Chinese Graveyard. It appears to be a private family cemetery, as many of the markers share the same surname, Guzman. But, on the right side of the burial ground, there are a few Chinese named graves.

According to research, the property is still owned by the Guzman family, and one of the members of the family, Joey Guzman, even spoke of the burial ground on record in 2009 with 'Horror Haunt in San Antonio Unearths Ghostly Tales' (KENS 5 News).

Joey Guzman said that the graveyard began over a hundred years ago. And, as for the meaning behind the Chinese Graveyard's name, Guzman stated, “Supposedly, a Great uncle of mine was seeing a Chinese woman and they were in love.” And, according to Guzman, when the family found out about the relationship, his great grandfather forbade his uncle from seeing his true love.

Guzman (the caretaker of the property) said that the cemetery was where his great uncle and his love would meet in secret. Apparently, one night his great uncle was riding his horse to meet his secret love, when he and the horse were killed by lightning. Afterward, he was buried in the family graveyard.

It was said that the woman, broken-hearted, later went to his graveside and committed suicide. The family so guilt-ridden that they drove the pair to act in secrecy, ultimately dooming them to death, that they decided to bury the woman alongside her love.

Since that day, Guzman said, there is a curse on the graveyard, and that those who continue to see the ghost of the woman will be struck by lightning just as the love of her life was. Perhaps, her ghost isn't too keen on her Romeo and Juliet ending.

The Hauntings at the Chinese Graveyard

The ghost of the woman is said to sometimes appear as a white mist, while others have claimed to seen a full formed, towering seven foot tall apparition of an Asian woman.

Rhett Rushing, folklorist and former employee of the Institute of Texan Cultures, said of the hauntings, that you're supposed to drive to the cemetery, park at the gate, facing the big white cross, roll down your windows so that you are exposed to the air, turn your lights off, turn your car off, wait, and then flick your lights five times.”

It is then that the seven foot female spirit will appear. “Most people tear out pretty quickly thereafter,” added Rhett Rushing. But, if you stay, the ghostly woman may walk over to your car, and once there, reach through your rolled down window to physically grab your arm.

An unnamed source claims to have gone to the graveyard to put the urban legend to the test. Awhile back, the source and a few friends had parked just in front of the cemetery and, as was expected of them, flashed their lights five times. Then it happened, a tall ghostly image appeared, turned toward them and began to glare. After that, they didn't even bother waiting to see if the ghost would move in their direction. They’d had enough of their fill of excitement and decided to vamoose right on out of there.

One of the more recent ghostly accounts happened in June of 2015. It was past midnight when a young couple drove up to the gate of the graveyard. They sat in the car for a moment before readying themselves to flash the car lights. After the fifth flash, they suddenly saw the much talked about white mist emanate from thin air.

The young couple froze, stunned by what they were witnessing. Everything grew eerily quiet, as the mist began to form into a large apparition. The tall spirit began to move towards the couple's vehicle, but then stopped. Within seconds of halting, the spirit vanished, almost as quickly as it first appeared. The couple still shock by the sight, remained there for over half an hour before finally leaving.

Some believe the source behind the Donkey Lady was of Chinese origin. It this version, the Donkey lady was attributed as unattractive due to a physical deformity. For this, she was deemed an outcast, and was shunned from the community of South Side, San Antonio. The women lived in a small old shack near a bridge the bears her moniker, The Donkey Lady Bridge.

One night, the woman's house went ablaze, while she slept. The fire left the poor women further disfigured, and she later died from her injuries. It has been reported in the past, that her remains were buried in the Chinese Graveyard. And, on some nights in the cemetery, you can hear the woman screaming, as if she was still caught in the inferno.

One visitor of the Chinese Graveyard claimed, "we walked along the side and heard a woman scream." Could this have been the Donkey Lady? Maybe so.

Some visitors have reportedly experienced cold spots, while at the cemetery during a hot summer night. Also, light orbs have appeared on several occasions. And, creepiest of all, is the constant sense that you are being followed. Pretty unnerving considering the size of the graveyard is the radius of about two blocks.

A man named Ryan, recounted his experiences at the Chinese Graveyard: "On many occasions I've have seen and felt strange things. " During his first visit to the cemetery, Ryan stated, "I saw a black shadow fly and hover across the cemetery and a ghost fog; in the front part of the graveyard", which prompted him to leave that very moment.

The next time he went, Ryan brought his girlfriend, and some friends to the cemetery with him. After a short while, his girlfriend said, "I think we better leave Ryan" , to which Ryan asked, why? He then described, that he started to feel something trying to take control of his body. Ryan said of the experience, "I couldn't breath, move, speak or yell, and that was actually inside the cemetery."

Another person named Val visited the cemetery with a group of people, she said upon their arrival, "Once we walked inside, I remember having this great feeling of remorse fall over me, as if I had done something bad". Of course there were weird noises, but that didn’t bother me, it was the feeling I had. When we were leaving I remember hearing footsteps right behind us as if whatever it was, was following us out."

Over the years, the graveyard has become a site for conjuring and the practice of witchcraft. This prompted the Guzman family to post a sign explicitly stating "No Witchcraft", however, the sign has done little to stop the practitioners.

There have been numerous accounts of visitors being chased away by a group of people dressed in black, appearing to be dabbling in the occult. A couple of the visitors, said that it "scared the hell out of us" and that they haven't been back since.

These incidents usually happen past midnight (of course), on those nights when there is a full moon. These spell casters and black magic fanatics attend the graveyard on a more frequent basis during the month of October as all Hallows' Eve approaches. Could they be attempting to summon Samhain?

If you were to visit the graveyard in the daylight, chances are you'll find items scattered about, left behind from previous rituals. But, if you do visit, and come across any of these items, leave them be. According to legend, bad luck and even spirits can possess these items, and anyone who touches them, may soon find themselves cursed.

The tiny Chinese Graveyard is located at 10445 South Zarzamora Street in San Antonio. This secret cemetery is hard to spot from the road, but near the front gate stands a white cross, seemingly acting as a calling card. But, this is not the case, as the signage posted amongst the trees and gate clearly articulate that the Chinese Graveyard is Private Property and don't you should Keep Out. This is a warning you should heed.

The centuries-old houses and businesses that line the streets of the King William Historic District are not your average popular tourist attractions. While San Antonio offers a blend of art and culture, King William transports you to years gone by, with signs of San Antonio's history gathered all around you. But, this historic district is more than just a relic of the past: it is a true haunting ground in which the ghosts refuse to leave. So, when visiting, bear in mind to be respectful of all the lost souls of the King William, as you should never give a ghost a reason to become vengeful.