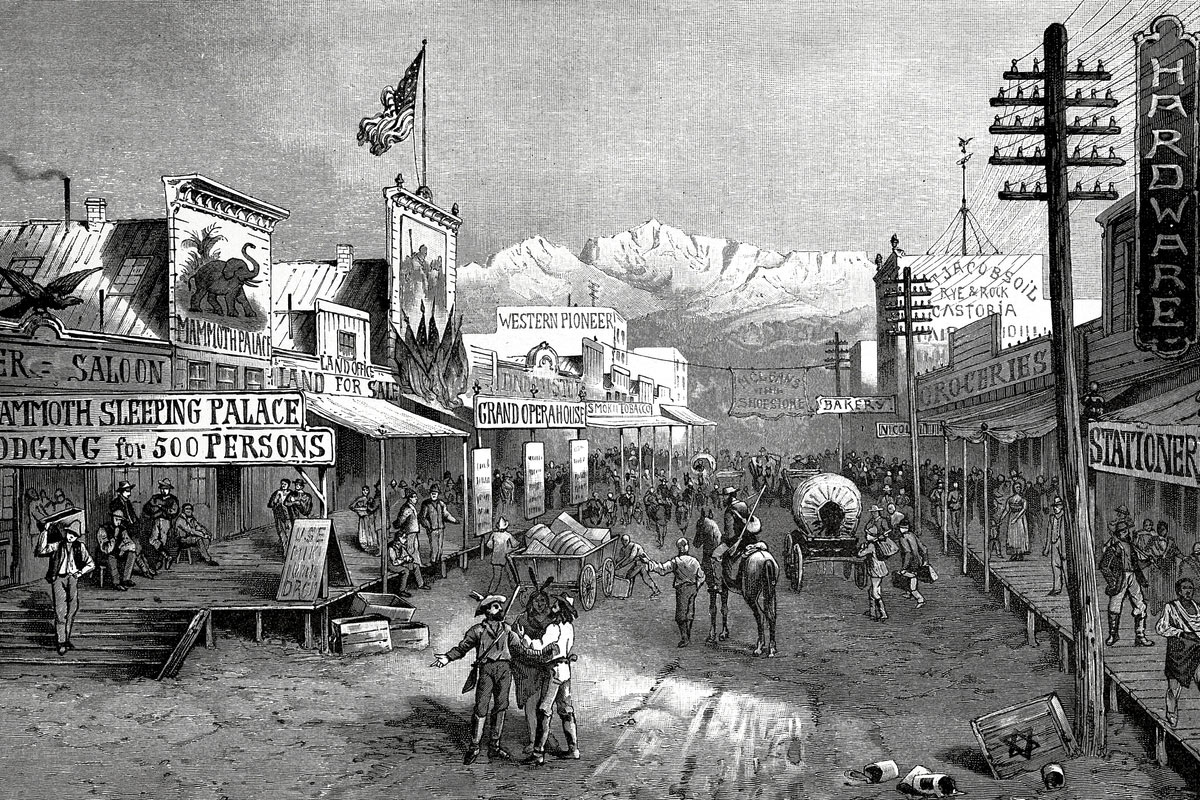 The Ghost and Legend of Bob Augustine

The ghost towns of the Old West have a special place in our country's history. They are as synonymous with America as the Fourth of July and apple pie (I personally hate apples, does that make me a commie?). The ghosts who haunt these abandoned towns (turned tourist attractions) were victims of the inevitable, whether an innocent or a miscreant, these souls were doomed. Doomed all the way to the end because the boomtowns of the old west were destined to become ghost towns, as they were the manufactured product of greed and lawlessness. But, while the boomtowns of South Texas began to fade into the recesses of civilization, cities like San Antonio continued to flourish, as it was not rely on one particular facet.

The Arrival of Bob Augustine

From the beginning of the Old West era, the most cutthroat outlaws the Wild West had to offer flocked to San Antonio, Texas. San Antonio had more saloons, gaming and dance halls, and bordellos than any other place in Texas. Now, when you combine the baddest of the bad gunslingers with copious amounts of alcohol, what do you get? Violence and murders! (No, really, it's true). The baddest of all the San Antonio gunslingers was Bob Augustine, and he simply relished in tormenting the people of San Antonio. So much, so, that his ghost still haunts the very streets he used to terrorize.

For decades the most influential man in San Antonio—the Tony Montana of the place–was the desperado, Bob Augustine. Upon his arrival, he already had a reputation for killing a dozen men. Although little is known about his origins, some believe he was connected to the Sutton-Taylor family feud (the Hatfields and McCoys of Texas). Others theorized that he was a member of General William Walker private military that led an expedition in Nicaragua. Most likely, he was just a drifter from Goliad, Texas, who knew how to bluff his way through any situation.

Despite being a loathsome murderer, Augustine was a charming man—a Casanova of sorts. He's been described as having a "fine chiseled face, brown expressive eyes and a little black mustache." He was known to be a man of style, who wore a black sombrero, well polished boots, corduroy trousers, accompanied with a white shirt, embroidered vest and red silk tie. He easily attracted women, as he chewed on his toothpick with a seductive devilish grin.

At first, people were kind and welcoming to Bob. They mistakenly believed the stranger was influential, and he was even generously granted loans as the San Antonians did not want to treat him discourteously. Bob would proudly boast to the people about his marksmanship, even once giving a demonstration of his ability. He walked through an area of the town that had a lane lined with cottonwood trees on both sides. In each hand he held a six-shooter, as he proceeded to hit each one of the small targets, which were previously marked on the trees. Then he took it up a notch, repeating the skill, only this time he rode upon his horse. He galloped through the lane, once again hitting each and every one of the targets.

The Reign of the Desperado

The people of San Antonio quickly learned that there was more to Bob than just his sharpshooting abilities. He was also a mean and violent drunk. Ole Bob was so cold hearted, he would actually shoot and kill somebody if they stood in the way of what he perceived to be a "good time." He was so fearsome that after killing some poor bastard in cold blood, all he had to do was let the jury and judge know that if they dared to find him guilty, he would kill everyone of them without the slightest bit of hesitation. He was always promptly acquitted and released from jail.

One infamous story about Bob is the time he set out to avenge his friend, Hek Rote. Hek had stolen a horse from an old Mexican man, who reported the crime to the local authorities. The commanding officer tracked Hek down, and made him return the horse to the old man. Bob was enraged that the old man ratted on Hek and sought him out. He searched every saloon in San Antonio, and finally found the old man. As Bob approached the table where the old mad was having a drink. He picked up a chair, but before he could crack it over the man's head, the bartender Jesse Sumpter interrupted, grabbing the chair out of Bob's hands. Bob then reached for his trusty six-shooter, aiming it at the old man. Jesse again stopped Bob, while yelling in Spanish at the old man, "Run for your life!" The old man quickly rushed out of the bar, as Jesse continued to hold Bob back. After awhile, Jesse was able to calm Bob down, and the two shared a drink. Jesse knew Bob all too well, and as such new his capacity for violence. On one prior occasion, Jesse had witnessed Bob shoot a man dead during a fight at a dance hall.

In wake of the lawlessness running rampant throughout Texas, vigilance committees were formed. These committees were mostly comprised of the law-abiding types, although the self-serving made their inroads. The goals initially were simple, their purpose was to maintain order and protect the lives of the citizens and their property. Like Batman, or most other comic book vigilantes, members of the committee would often operate in the middle of the night. Once they caught their wanted man, they did not bother in bringing said outlaw to the justice systems (which had repeatedly failed them in the past). Instead they became the judge, jury and executioner, often hanging the individual on the very night of their capture.

Although these secret organizations preferred to operate under the radar, in the shadows of the dark night, they would sometimes succumb to their anger and act out in a mob. It usually took an especially odious person to bring forth that sort of mentality, and Bob Augustine had a way of bringing out the absolute worst in people.

On the 7th of September, in the year of 1861, the desperado, Bob, was at it again on another one of his now famous drinking binges. But, he took it too far this time: he rode his horse through the streets, shooting at the streetlights, even wounding a man in the leg. He then rode through Military Plaza, shouting his rebel yell at the top of his lungs. He galloped his horse amok, knocking over chili stands, sending the vendors into chaos. He reportedly, at one point, jumped off his horse in an attempt to catch a woman. When the police finally arrived on the scene, they wrestled the drunken maniac to the ground, and hauled ole Bob Augustine off to jail.

The End of Bob Augustine

The jail was built in 1850 on the northwest corner of Military Plaza, and was nicknamed the "Bat Cave," as it was known to house many bats at night. When the following morning came about, and Bob once again found himself standing in front of another judge. This time it was Judge Sweet. Bob requested quite adamantly that he be granted a trial. The judge, frightened by Bob's reputation, quickly formed a jury. When Judge Sweet asked Bob how he plead, Bob stared him and the jury down like an caged panther, and stated: "I'll kill every last one of you, if you find me guilty."

He was almost immediately found not guilty. Bob retrieved his pistol, and walked out of the courthouse feeling untouchable. But, when he looked out in front of him, his smile quickly vanished, as before him stood a crowd 300 strong, an angry mob that was assembled by the vigilance committee.

The people of San Antonio had had enough of Bob Augustine's treachery, and after seeing his fellow citizens out in force, united in solidarity, Judge Sweet found his courage. He threw ole Bob back into his jail cell, right where he belonged. That night, Bob tried to escape but was seen and captured. The mob of angry citizens dragged Bob to a chinaberry tree, and as they tied Bob's hand behind his back, he begged for them just to shoot him, so that he would not suffer the horrible fate of being lynched. But that is precisely what the mob wanted. They wanted him to suffer, just as they had throughout his tyrannical reign. No, no mercy at all, not even as the Catholic Bishop pleaded with the crowd to stop the madness. But, they were done, done with the justice system, and were beyond reasoning at this point.

The mob strung Bob up, and hung him from the tree near the front of San Fernando Cathedral.

If you were to visit San Antonio's Military Plaza today, we encourage you to walk by the very spot where Bob Augustine was hanged (vigilante style). You just might hear a disembodied John McClane-esque rebel yell, similar to what Bob was alleged to have hollered out the day he rode his horse through the plaza. The Military Plaza has had numerous amounts of ghostly sightings, more than most places in San Antonio, and it only makes sense. After all, Military Plaza saw more outlaw hangings than any other area in town, and it's safe to assume that those rebellious outlaws—men who cared little for the law in their lifetimes—continue to wreak havoc after death.

Watch your purses, keep your eyes alert. In Military Plaza, it's not the living you have to worry about, but the dead, ghostly outlaws still causing mischief in the After Life Reign of Spectral Terror.

Coming to San Antonio? We'd love to take you on a spooky journey to some of San Antonio's most haunted locations on a ghost tour.