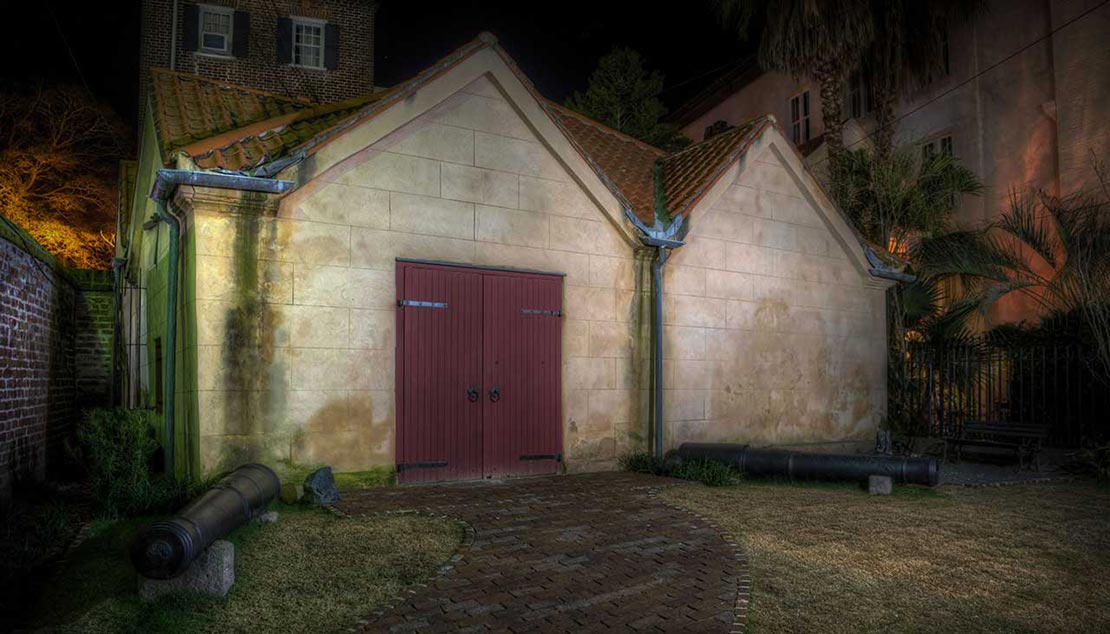 If you’re looking for ghosts, it makes sense to start somewhere old. The more history and life a location has seen, the more likely restless spirits may reside there.

As one of few surviving structures from the colonial period, the Powder Magazine in Charleston, South Carolina has the benefit of time on its side. The structure was built in 1713 by British colonists to house guns and ammunition so that the fledgling colony could protect itself from the dangers around it. Its solid walls kept Charleston’s weapons safe for over one hundred years before being decommissioned.

It’s safe to say this building has seen a lot of action from, Indian wars and Spanish threats to French invasion and colonist insurrection. And, if you believe the local lore, it’s said that some of those who fought and died in these exchanges never left.

The History of the Powder Magazine

The history of the Carolina colonies ties in heavily to the building of the Powder Magazine.

In 1663, King Charles II of England granted a charter to eight lord Proprietors to establish the Carolina colonies. The capital of the colony was what was then known as “Charles Town.” As you can see, the name was a not-so-subtle nod to their kingly benefactor.

But things were more complicated than that.

Although King Charles granted the proprietors the land, the Carolinas were considered a private colony, which meant they didn’t have the benefit of things like a lord mayor or a standing army.

As for defense, well, the colonists were pretty much on their own. It was a pretty hostile world back then. The Spanish were constantly trying to expand their colonies. Though alliances did occur, Native American tribes were often hostile (and for good reason!). The citizens had to protect themselves. They decided to build a wall around the entire city and construct a building that was fortified enough to house an arsenal.

The Powder Magazine was completed in 1713 but not without its problems. Originally, it was intended to house mainly gunpowder as well as other weapons, but as it turned out, the roof was a little leaky.

Nobody likes wet gunpowder, so after several more years of construction, the building was finally rainproof’ed in 1717.

The Design of the Powder Magazine

Leaky roof aside, the design of the Powder Magazine is a marvel.

It’s a small, one-room building, measuring 27 feet by 27 feet. Its Mediterranean-style roof matched the skyline of the rest of the city. Here’s where things get serious: it’s 32 inch thick, brick-fortified walls could withstand almost any blast. This thickness tapers to only several inches once it reaches the top of the building. In the event of an explosion, that, coupled with the structure’s lack of windows, would allow the blast to move upward, which would cause the roof to blow like a top. Tons of sand stored in the attic would then, in theory, douse the flames.

It’s almost a shame that the Powder Magazine never took fire, as the colonists never got to see if this unique architectural safety measure actually worked. In any case, the sand still remains in the attic to this day.

After its inception, the city of Charles Town managed to survive through a few altercations, such as the Yamasee Indian War, the French and Indian War, and a pirate blockade.

It was only after the colonists executed the last pesky pirate that they demanded a little more protection from overseas. In 1729, Carolina became a royal colony complete with its own royal British army. This was not to last for long.

The Battle of Charleston

By the 1770’s, the royal colonies were fed up with British rule. Britain was growing fat off of America’s imports and exports, but American colonists were paying large taxes on British imports like tea and for the transferring of legal documents. Even with all those taxes, they still did not have any representatives in Parliament. No one likes taxation without representation.

The colonists decided to fix that.

In April 1775, the first shots of The American Revolutionary War rang out in Concord, MA, but the war would not reach Charles Town until 1779. Since the residents of the Carolinas were once so keen on becoming a royal colony, the British mistakenly assumed that when they moved down south, they would find a loyalist haven.

Unfortunately for all parties involved, they were not welcomed with open arms.

In May of that year, the British launched what would become the largest, most sustained siege of any American city. The siege of Charleston lasted over forty days and only ended after the town eventually caught fire and American General Benjamin Lincoln finally deigned to surrender.

The royal army began their careful assault by digging trenches all around the city. Though they remained under thick colonial fire the entire time, they managed to get closer to the city walls bit by bit.

Then, the royalists surrounded the city and began thinking of ways to cut off supplies to the city’s inhabitants. In a stroke of luck, the royal army intercepted a letter addressed to General Lincoln that offered information as to where the Charleston troops were stationed.

The royalists surprised the colonial troops in the wee hours of the morning, irrevocably turning the tides in their favor. The battered city limped through several bungled attempts at surrender until, on May 11, British artillery fire came so close to the center of town that several homes caught fire. That was the last straw for proud General Lincoln, who promptly surrendered the city.

Though the city was captured, the war was not yet won. The loyalist stronghold that the British expected to find in the Carolinas was nothing but a fantasy. It was at this time that guerrilla-style fighting began to break out all throughout the territory. These violent encounters went on for quite some time.

Even the defeat of the south’s only standing army did not deter the colonists.

And what about the Powder Magazine? Although “the British captured 311 artillery pieces, 9,178 artillery rounds, 5,916 muskets, 33,000 rounds of small arms ammunition, 212 hand grenades, 15 Regimental Colors, 49 ships, and 120 boats, plus 376 barrels of flour and large magazines of rum, rice, and indigo,” it did not come from the magazine.

It was feared early on that the building would be a military target, so the soldiers decided to empty it of all gunpowder and artillery. “Surely,” they must have thought to themselves, “even if the city falls, the gunpowder will be safe.”

They were right. The British never found the gunpowder. It was hidden not too far away in the damp basement of The Old Exchange Building. It was recovered after the war and found to still be viable.

After the city’s surrender, all of its inhabitants became prisoners of war. It was the British army’s job to decide what to do with them. Important people, such as senior officers, were exchanged for high ranking, captured British officers. Others were sent to the prison ships floating in Charleston Harbor where they were ravaged by filth and disease.

Several hundred prisoners, as well as some British officers, suffered another tragic fate. A group of captured soldiers was led to a powder magazine (Don’t worry! Not this one) along with several hundred muskets and assorted spoils of war. A lone Hessian soldier warned the commanding officers that some of the guns were still loaded.

A musket discharged, setting off a chain reaction that would cause 5,000 other muskets to also discharge. It also caused 180 barrels of gunpowder to explode. The incident destroyed six homes and left 200 people dead. And that’s how you become a sore winner.

The Powder Magazine After the War

Though The Powder Magazine would see a bit more action, it began to fall into disuse in the mid-nineteenth century. After the French and Indian War ended, the city of Charleston began to experience some more peaceful times. The magazine then became nothing more than a general storage facility. It’s most interesting use was as a wine cellar for Gabriel Manigault, a descendent of a French Huguenot and the wealthiest man in North America at that time.

By the beginning of the twentieth-century, the building was looking a little the worse for wear. That is when The Colonial Dames of America decided to step in to preserve this priceless piece of history.

The Dames bought the building in 1902 and turned it into a museum. In 1972, it was added to the National Register of Historic places. Though it was once nothing more than a thick pile of bricks used to store gunpowder, it is now a national landmark. The museum remains open to this day.

The Ghosts of the Powder Magazine

It is often said that spirits are connected to violent places and events. There’s something about tragedy and mass murder that keeps spirits from crossing over.

If that’s the case, then The Powder Magazine should be full of them. Whether it’s the suddenness or the senselessness of it, war leaves ghosts behind.

Just as many people have seen ghostly soldiers crossing the battlefields at Gettysburg, some have reported seeing the same sort of residual spirits of soldiers still guarding their posts at the Powder Magazine in Charleston.

While it is disputed, some rather famous ghosts are purported to haunt the Powder Magazine as well.

Guests of the museum have claimed to have seen the ghost of the infamous female pirate and Charleston resident, Anne Bonny, peeking out from behind the displays.

Bonny, born in 1690, ran off and married pirate James Bonny while in her teens. Though she’s been linked to other famous pirates, such as the flamboyant Calico Jack, she was a fierce pirate in her own right. Her fiery temper has been well documented, and her bravery and determination rivaled the men of her time.

In fact, her spirit is so strong, many people claim to see her ghost at other locations in town.

Bonny is believed to have met her end at the ripe old age of 88 in her hometown of Charleston. Is it possible that her presence still lingers? Many people say yes. Take a walk down Charleston’s historic streets and maybe you’ll run into her.

Other shadowy figures have been spotted at the Powder Museum as well.

Who they are is anyone’s guess. Perhaps it’s old Gabriel Manigault perusing his wine cellar or even one of the Lord Proprietors of the Carolinas himself, Sir Peter Colleton.

The Powder Magazine is located at 79 Cumberland Street in Charleston, SC. It is now a museum dedicated to colonial military history. The museum’s hours are Monday through Saturday 10am - 4pm and 1pm - 4pm on Sundays. Admission is $5, a small price to pay to visit a priceless piece of colonial history (and maybe see a ghostly soldier or two!).

Are you visiting Charleston? Do you want to visit the most haunted places that Charleston has to offer? Ghost City Tours has been Charleston's #1 Tour Company since 2017.

Get to know Charleston's Most Haunted Places 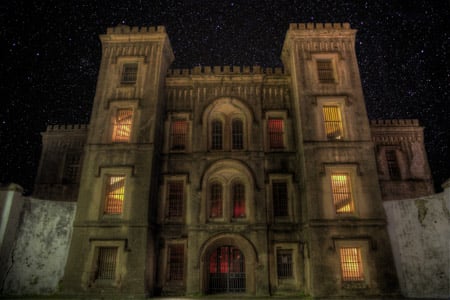 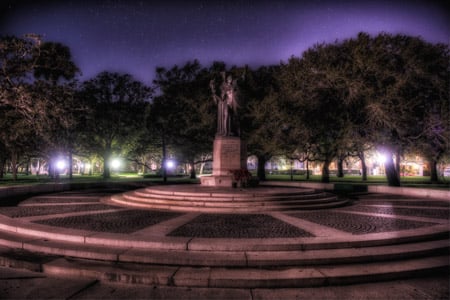 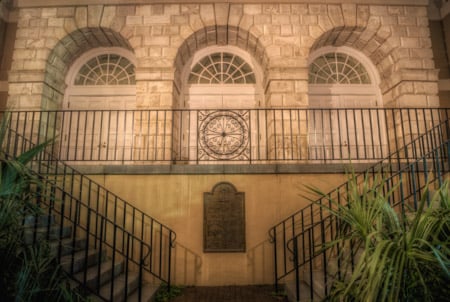 The Exchange and Provost Dungeon

The most historic, and haunted building