Ghost City Tours is partnering with The Artist House to give you both solace and scares while in Key West. All guests of The Artist House are encouraged to utilize the discount code ARTIST15 to receive a 15% discount off all Ghost City's amazingly terrifying Key West Tours ticket prices. 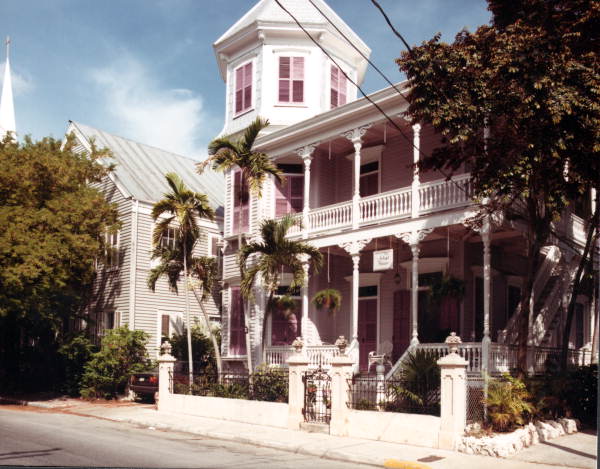 The Haunting of the Artist House

Many know that the Artist House was where Robert the Doll once lived, a doll known for placing terrible curses on those he found disrespectful. Those sensitive to residual energies even caught Robert seeming to move on his own.

It has been many years since Robert has lived in the house, so you would imagine that anything paranormal that may have happened stopped long ago, right?

In all actuality, so much more activity has been going on since – things like doors opening and closing by themselves and lights flickering on and off.

Some guests have reported seeing the apparition of a woman in a wedding dress walking down the stairs. They have even claimed that they have had conversations with the spirit. Other times, guests will wake to see a shadowy figure of a woman at the foot of their bed.

Many believe this to be the spirit of Anne, Gene’s wife. She seems quite content to have people staying in her home, no doubt she’s just making sure her house is safe and in good hands.

Robert the Doll has a particularly fascinating genesis, one that may not fully seem like the makings of a horror movie on its own. Robert started out as Gene’s childhood toy.

Now, there are conflicting stories about who exactly gave Gene the doll. Some say it was his grandfather; others say it was an African American woman who was an acquaintance to the family that may or may not have practiced voodoo.

Nevertheless, Gene took an instant liking to the doll. It was life-sized and bore a striking resemblance to the young child. Because of that, he decided to name the doll Robert, Gene's own first name. It was that day that Robert Eugine Otto became simply Gene Otto.

Only Robert knows that.

When Gene and Anne moved in, strange things began to happen that wasn’t possibly Gene’s doing.

One day Anne saw children outside the house, looking up at the turret window where Robert and Gene were often. They would shout and scream that it had moved. Thinking that it was Gene having fun, she asked him about it later.

Gene replied that he hadn’t touched him at all. At that moment, Anne swore she saw the doll change expression, almost as if he was amused with himself. From that day on, Anne had no love for the doll.

When the Ottos died, the house was sold off to a new owner and Robert stayed. At some point, Robert was donated to the East Martello Museum, leaving the Artist House to become the bed and breakfast that it is today

Robert now stays at the museum on display for everyone to see. Just make sure to ask him to take his picture – or you may find yourself in some bad luck from here on out.

But is Robert really cursed? It’s hard to say what Robert was when Gene had him – if he was alive at all. Perhaps when Gene died, his spirit habited the doll. Or, perhaps now Robert is alive. Of course, only Robert knows that.

When they first settled in, Gene began making a room in the attic for Robert, building little furniture and clothes for him. The attic was for Robert and Robert alone. It was at this time that Anne met Robert for the first time, and already her dislike for him began.

Gene, Anne, and, and Robert all lived in the house for 40 years until Gene's death in 1974. Anne would move back home to Boston until she died two years later. Robert remained in the house, living with new homeowners until 1978 when the Artist Hotel was bought and renovated as a quaint little bed and breakfast.

Are you visiting Key West? Interested in learning more about the most haunted places on the Island? Join Ghost City Tours on one of our Ghost Tours and see what the excitment is all about!

Get to know Key West's Most Haunted Places

Is the ghost of Hemingway haunting here?

It is no surprise that the county jail is haunted