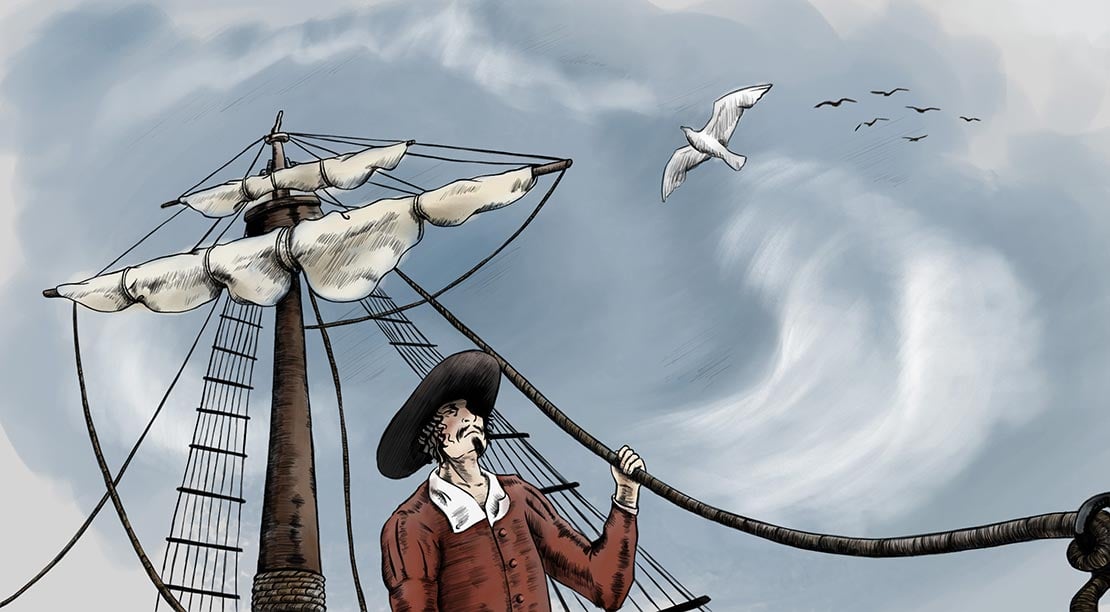 The Ghost of Jean Lafitte in Galveston

Pirate, privateer – poltergeist? Although piracy is engulfed in ghostlore, Jean Lafitte remains one of the most recognizable players. From slave smuggling to seizing ships, Lafitte was no stranger to organized crime. His legend isn’t exclusively illegal: Lafitte helped Andrew Jackson defend New Orleans from the British in the War of 1815. Yet Lafitte didn’t stay long in the swamp, instead relocating to the east end of Galveston. Rumor has it that he remains there, still – residing in his Maison Rouge with his Campeche Devil Dogs, spooking the seaside estate, prowling upon the property. Who was this historic anti-hero? Is he the plank-walking poltergeist he’s made out to be?

According to local legend, Jean Lafitte is Galveston’s most infamous inhabitant. The Maison Rouge is steeped in supernatural activity, leading some to suggest that Jean Lafitte haunts his former home. From Lafitte’s pack of creepy canine to frequent, phantom orbs, there’s no doubt that the Maison Rouge is otherworldly. But what’s spooking this strange estate?

If Jean Lafitte’s presence isn’t eerie enough, he isn’t alone: he prowls the property with a pack of canines, better known as the “Campeche Devil Dogs.” Bred to hunt man as well as animal, the Campeche Devil Dogs are the monstrous mongrels of the Maison Rouge.

Locals say that Lafitte demanded the dogs from a Voodoo Priestess, who consequently cursed them upon their release. It’s now a common superstition that seeing a pack of dogs is an ominous omen, foretelling tragedy or trouble. Visitors who approach the property allege that they can hear their ghastly growls. Some say that they can smell the faint scent of wet fur... (Which is always unpleasant, but worse whenever it’s from an infernal fiend.)

Unexplained screams are also heard from the ruins of this paranormal property. One witness alleged that she overheard two men arguing, yet the men were unseen and unaccounted for. Once she looked from her window, the men – and the noise – disappeared. Both returned whenever she retreated within her room, only to vanish again once she looked for a second time. Was this the Ghost of Jean Lafitte – or something else?

Phantom orbs are the most frequent paranormal occurrence at the Maison Rouge. Balls of light are reported, ranging from bright blue to yellow. Nearby residents claim that the orbs occur so frequently that they no longer notice them. Are these baffling balls of light what photographers commonly refer to as “backscatter,” or are they evidence of a spiritual encounter?

Who was Jean Lafitte?

Jean Lafitte, the “The Terror of the Gulf of Mexico," was a tall, attractive man known for his good looks as much as his illegal ongoings. With his swashbuckling style, it’s easy to forget about his criminal enterprise. Even images of Lafitte emphasize his upper-class clothes and confidence, celebrating his aristocratic airs before his lawlessness. Yet this well-dressed privateer was a smuggler, nevertheless – however suave or sophisticated his mannerisms.

A Legacy of – Good Looks?

In the 1856 “History of Texas,” Henderson Yoakum described Lafitte as a “well-formed, handsome man, about six feet two inches in height, strongly built, with large hazel eyes, [and] black hair,” who “generally wore a mustache.” Lafitte “dressed in a green uniform and an otter-skin cap. He was a man of polite and easy manners, of retired habits, generous disposition, and of such a winning address, that his influence over his followers was almost absolute.” Lafitte’s legendary looks were as famous as his felonies.

The Early Life of Jean Lafitte

The history of his early life is muddy, with details either unknown or obscure. Scholars even contest his birthplace. Some argue that he was born in France, while others disagree. There are also quarrels that he was born in Spain, Haiti, or New York. The most accepted anecdote is that Lafitte was born in Bayonne, approximately 1780.

Yet Lafitte and his family relocated to the island of Hispaniola, and, eventually, New Orleans. By 1808, Lafitte steeped himself within smuggling operations across the Gulf Coast. (His brother, Pierre Lafitte, assisted him. Pierre is less infamous than Jean, but led an equally unlawful life.)

Lafitte and the Louisiana Slave Trade

Yet Lafitte was still a criminal, for all of his peculiarities, precarity, and positive attributes. Indeed, Lafitte’s most profitable “commodity” was enslaved Africans. The United States had banned the international import of slaves in 1808, though smugglers were still trafficking enslaved Africans into the Port of New Orleans. And, by 1810, Lafitte was submerged in the slave trade of the South Atlantic – complicating the myth of this meandering marauder.

In 1814, Lafitte's unlawful operations came to an end: Commodore Daniel Petterson invaded the Barataria Bay. Yet Lafitte was offered a second chance in 1815 once an invasion by the British Army was imminent. Destabilizing Lafitte's empire had left Louisiana undefended, and officials acknowledged that they could use Lafitte's help. So, Louisiana asked Lafitte to assist General Andrew Jackson against the British invasion. In return, Lafitte would receive a criminal pardon. Lafitte agreed; New Orleans was saved.

How Did Jean Lafitte Arrive at Galveston?

Lafitte wouldn’t stay in New Orleans for long. Chased from Louisiana in 1817 near his fortieth birthday, he ultimately settled on Galveston Island of Spanish Texas. There he established "Campeche" – a township designated for outlaws and outcasts. Yet Campeche wasn't totally lawless: dwellers were required to swear a loyalty oath, alleging themselves to the pirate king. It was in Galveston, too, where Lafitte served as a spy for the Spanish during the Mexican War of Independence.

Campeche, The Pride, and the Maison Rouge

Within a year, Lafitte's colony grew to two hundred. Lafitte established his headquarters within the Maison Rouge, a red, two-story building facing the inland harbor. Yet Lafitte conducted most of his business aboard his ship – the ever infamous "Pride."

Lafitte’s corsairs advanced against the Karankawa. Yet, unlike the Karankawa, the corsairs massacred the majority of men within the tribe. Lafitte’s men did receive their due punishment: a hurricane sank four of Lafitte’s ships within the same year, while only six houses survived. Do Ghosts of the Karankawa haunt Galveston, too?

In 1821, the U.S. Navy demanded that Lafitte depart American waters. One of Lafitte's captains had raided an American merchant vessel, infuriating American officials. So, the USS Enterprise arrived at Galveston, tasked with removing Lafitte at all costs. They even ordered that Lafitte take his crew with him.

Lafitte complied with the U.S. Navy, but not before setting Campeche aflame. Even Lafitte's Maison Rouge was incinerated in flames.

What Happened to Jean Lafitte?

Lafitte was never again seen in Texas. Yet the conclusion of Lafitte's chronicles remains unknown. Scholars believe that Lafitte may have died from a battle wound, buried at sea in the Gulf of Honduras. Even the date of Lafitte’s death is uncertain, though Cartenega and Colombia published eulogies for Lafitte around 1824.

Perhaps he still resides in the Maison Rouge with his Campeche Canine? That would explain the faint scent of a wet dog.

Lafitte's guise as a gentleman has earned him a Robinhood reputation, but Lafitte's truth is more troublesome. Because Lafitte participated in the slave trade, Lafitte "falls from a charismatic protagonist to a scheming antagonist." He remains a controversial figure for the Gulf Coast, decided either as a villain or vigilante, a saint or scoundrel. Either way, Lafitte has left his mark on American history. Andrew Jackson may have lost New Orleans had it not been for Lafitte. Campeche would never have existed.

As far as plank-walking poltergeists go, Jean Lafitte remains Galveston’s most infamous inhabitant. Let us know if you catch a glimpse of this smuggling, swashbuckling specter, “The Terror of the Gulf of Mexico.”

If you're visiting Galveston and want to hear more stories about the ghosts of Galveston, join Ghost City Tours on one of our spooky ghost tours!