get to know the ghosts which haunt these historic burial grounds

For many people visiting Boston, taking in all of the sites of Boston's historic past is high on their 'must-see' list. For many people, especially the ones who want to get away from the crowds of tourists, visiting one of Boston's cemeteries becomes a priority. Wait, did we call them cemeteries? We meant Burying Grounds. Here in Boston, you'll find that many of the historic cemeteries and actually called Burying Grounds. That makes sense I guess.

When they're visiting Boston's historic cemeteries most people don't realize that some of these cemeteries are considered to be some of the most haunted places in Boston. For as long as the cemeteries have existed there have been stories about ghosts disappearing behind a headstone, of ghostly voices rising from the grave.

Stepping into one of Boston's haunted cemeteries is like stepping back in time - so it is easy to understand how one's mind could wander, evoking images of ghouls and ghosts. This is especially true if you visit one of these burying grounds at night or at dusk, which, if locals are to be believed, is when the paranormal activity at these historic places really picks up.

Visiting each of these burying grounds can easily be done in one afternoon - depending on how much picture taking and 'playing tourist' you do. All of the 3 most haunted cemeteries in Boston - King's Chapel Burying Grounds, Granary Burying Grounds, and Copp's Hill Burying Grounds - are all within walking distance of each other.

So, put on your walking shoes, grab your camera (and maybe a voice recorder for EVPS) and let us check out the top 3 most haunted cemeteries in Boston.

When you first enter the gates of King's Chapel Burying Grounds, you may notice a lot of tourists! This means you came at the wrong time. Turn around, leave, and come back later in the day. It will be worth the effort, we promise! After all, if you're hoping to have a paranormal encounter with one of the ghosts which haunt this cemetery, your chances are much better when there are not screaming schoolchildren around.

The first question we get asked about King's Chapel Burying Grounds is: "Who is haunting it?" Good question. I guess we could start to narrow down the list of possible suspects by taking a look at who is laid to rest here.

Dating back to the 1630's, King's Chapel Burying Grounds is home to a number of famous Americans who you've probably heard of. Of course there was no America when some of these people passed - but let's not nit-pick. Perhaps the most famous person laid to rest (ghost suspect #1) is John Winthrop. The first Governor of Colonial Massachusetts, Winthrop is laid to rest here. You'll also find the grave of Mary Chilton - the first woman to step foot in the new lands from the Mayflower.

It is believed that over 1,000 people are buried inside of King's Chapel. So, the chances of Winthrop or Chilton being two of the ghosts haunting here is slim. The realiity is, the ghosts which are often seen at the cemetery might not be anyone buried here! Okay, so figuring out who's ghost is haunting the King's Chapel Burying Ground is going to be a little harder than we thought. In reality we may never know.

What we do know is that there are ghosts seen roaming the burying grounds even to this day. Whether they're tourists, part of a ghost tour group, or normal citizens, there isn't that much time between one ghost sighting and the next. The most common ghost at King's Chapel seems to be that of a woman who is seen in the back part of the cemetery. Always dressed in white, this ghost is seen lingering at random tombs and headtones before disappearing into the nothing. Who could this be? We don't know for sure. But, if you join us for one of our Boston ghost tours we'll let you know who we think it could be.

Afetr looking for the ghosts at King's Chapel, let us make our way to the next cemetery on our list of Boston's haunted cemeteries, the Granary Burying Grounds.

When you hear some of the names of those buried inside you'll feel like you journeyed back to Elementary School History Class. Paul Revere, John Hancock, Peter Faneuil, Sam Adams (the Patriot, not the beer) - these are just some of the famous Americans who are laid to rest at the Granary Burying Grounds.

Looking for the perfect ghost tours in Boston? Ghost City Tours is proud to offer our haunted history tours in one of America's most historic and haunted cities. Follow the link below to see our Boston Ghost Tours.

Get to know Boston's Most Haunted Places 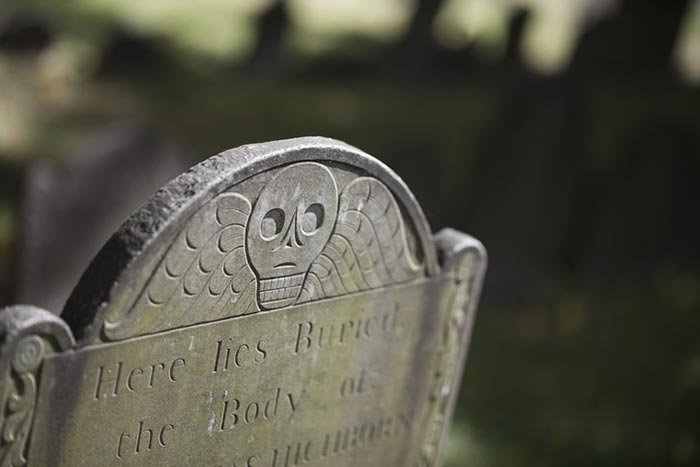