The Ghosts of Bunghole Liquors

the history and ghosts of one of Salem's most haunted places

Massachusetts’ infamous city of Salem is known for its gruesome past. A past filled with religiously motivated violence, alleged satanic practices, and dark witch hunts. We have all heard the stories of the haunted Witch House and Proctor’s Ledge, which are without a doubt incredibly fascinating tales. Salem is a must-see destination for those interested in witchcraft and the occult.

What is unknown by many is that Salem is haunted, not only by the wicked ghosts of executed witches, but by animals, phantom sailors, and ill-shaped shadow figures. The city of Salem is home to numerous lesser-known cursed locations, each one with its own unique spooky history.

One of these locations is Bunghole Liquors, an eccentric establishment in the heart of Salem, which is home to the spirits of many deceased locals.

In the United States, Prohibition took effect on January 17, 1920. During this time, the production, importation, transportation, and sale of alcoholic beverages was banned. This ban forced many establishments, that had formerly conducted business legally, to close down. Others adapted and made the best out of a less-than-ideal situation.

The fact that alcohol was prohibited made people want it even more. Alcohol was now in extremely high demand and everyone was looking for ways to supply it. Needless to say, people found workarounds and booze started to flow into major cities. Soon, hundreds of secret illicit bars emerged and flourished during this dry time in history. This new wave of illegal bars allowed folks to drink and socialize. The location of the bars, as well as what was going on inside, was kept secret. As long as the local authorities did not discover the operation, the fun would not end.

Many of these hush, hush bars were known as Speakeasies. These had lavish interiors and required people to provide a soft-spoken password to gain entry. Yet, not all of these vice-oriented bars were fancy jazz clubs, ballrooms or dance halls. Many were dingy rooms in apartment buildings or the basements of local legit businesses. Bunghole Liquors undoubtedly falls into the latter category of secret bars.

Before opening its doors for business as Bunghole Liquors, the building served as a funeral home. The funeral home was located on Derby Street and, of course, housed Salem’s recently deceased at the time. The daily operations, however, did not stop the owner from turning the basement into a busy drinking spot. This was the perfect cover-up; lawful business by day, boozy hangout by night.

The undertaker’s friends - including a few locals - would gather in the basement, which functioned as the home’s embalming parlour. This was the area where the bodies were stored once they arrived, as well as where they were prepared for viewing. Surprisingly, partygoers would rendezvous by the embalming equipment - and the lifeless corpses - to enjoy their illegal booze. These gatherings undeniably paint a disturbing picture; pale cadavers, metal syringes, and glass formaldehyde bottles dimly illuminated by the room’s incandescent lighting. All the while, men converse casually and down their liquor.

Hanging out amongst the dead was a small price to pay in order to be able to drink during Prohibition. Though it might be unsettling to think that people would unwind while corpses laid just a few feet away, we can’t deny that the location was unique, to say the least. In fact, the somber setting likely served as a reminder to the living; life is short, enjoy it while you can!

The basement was such a popular drinkery that, once prohibition was lifted in 1933, the owner turned the funeral home into a bar. It is rumored that one of the owner’s drinking buddies made the suggestion, and seeing how popular the spot was during the 1920s, it is no surprise that he listened.

What is a Bunghole?

The name “The Bunghole” was proposed by one of the owner’s family members. Curiously, said family member was a Polish priest - Ordination and all. The name put forward by the priest hinted at the way the liquor was smuggled into the basement during the Prohibition era.

The location of the funeral home was perfect for transporting goods from ships that docked in the nearby Derby Wharf since the funeral home was right across the street from it. Proximity was definitely an advantage, but there was another factor that allowed for the liquor to be transported easily: tunnels. In the early 1800s, a series of underground tunnels were built in Salem. According to Christopher Dowgin, in his book titled Salem Secret Underground: The History of the Tunnels in the City, the tunnels were built by Elias Hasket Derby Jr. as part of a large wealth-driven plan. These tunnels were designed to connect the wharf to different buildings around the city.

The undertaker took advantage of these tunnels and used them as passageways to transport the booze-filled barrels into the basement of his business. By definition, a bunghole is a hole that is made in a barrel to release its contents. Naturally, the name of the bar alluded to a leak, a hole that allowed for liquor to flow, much like the underground tunnels allowed for the barrels to pass.

After Prohibition, the owner got rid of the bodies, obtained a liquor license and buried the embalming equipment within the basement walls. The bar was open for business not long after. The owner was so quick to convert the funeral home that, according to Dowgin, The Bunghole had the second liquor license to be issued in Salem after the ban was lifted. Finally, Bunghole Liquors could operate legitimately and without restraints. The Bunghole’s website confirms that: “if you crept downstairs and tore down a few walls today, you’d notice the embalming tubes (and no doubt a few empty flasks), left behind from the ancestors of The Bunghole, who occasionally haunt their old, secret hangout.”

The Ghosts of Bunghole Liquors

Although The Bunghole’s basement is believed to have the most paranormal activity - due to all the corpses that were once kept there - mysterious incidents are reported by the staff and customers throughout the premises. The Bunghole’s employees describe strange occurrences on a regular basis, especially when they are working alone at night.

In Susanne Saville’s book titled: Hidden History of Salem, the author claims that the majority of the ghosts that haunt Salem are cats. Saville mentions that a group of cats wanders the streets of Salem, entering through the open doors and windows of different properties. According to several sources, there have been strange ghostly cat sightings all over Salem; from a cat that haunts the Stephen Daniels Inn, to a feline-shaped ghost that showed itself to photographer Walter Sprange in different areas of the Salem Witch House.

This explains why one of The Bunghole’s employees confessed he felt a cat rub up against him when he was in the bathroom. He said the lights were off and he felt a furry animal, with cat-like movements, touch his leg. After asking a coworker and investigating the area, it turns out that there were no animals there after all.

According to traditional folklore, witches have been known for always having cats around, in particular black cats. These cats were commonly known as a witch’s familiar. Familiars were believed to be low ranking demons that were gifted to a witch by the devil. Sometimes, a witch would inherit a familiar from an ancestor. Familiars could be different species of animals. Common species of familiar were frogs and insects, but cats seem to have been a witch’s preferred companion. It is widely believed that familiars would feed on witch’s blood by sucking their blood from their fingers or suckling on their warts.

Ironically, a city that is known for its grisly witch trials and evil hauntings, is primarily haunted by the ghosts of the furry familiars that once stood by the witches’ side. This could be due to the belief that these animals were shape-shifting demons, dark energies that continue to walk the earth, even after corporeal death.

Employees have also mentioned seeing strange women go into the bar and disappear shortly after. One particular account describes how one of the employees accidentally bumped into a woman. At second glance, he realizes there is no one there and that the woman just vanished. One of the skeptical managers added that the basement security cameras have captured several glowing orbs floating about in the darkroom. These are believed to be the ghosts of the men that used to attend the parties there, stopping by to take another sip.

For those looking to grab a drink while experiencing the most haunted locations in Salem, this bar is a definite go-to. As put by author Sam Baltrusis in his book titled: Ghosts of Salem, this is the place to have “Spirits with Salem’s spirits.”

For those looking to grab a drink while experiencing the most haunted locations in Salem, this bar is a definite go-to. As put by author Sam Baltrusis in his book titled: Ghosts of Salem, this is the place to have “Spirits with Salem’s spirits.”

Bunghole Liquors is open from Monday through Saturday from 9:00 am to 11:00 pm and Sundays from 10:00 am to 11:00 pm. Swing by to enjoy some of Salem’s most delicious cocktails and experience the thrill of being amongst all the long-gone ghostly residents of 204 Derby Street.

Are you visiting Salem? Want to learn more about Salem's most haunted places? Join us on our nightly tours of Salem's most ghostly locations.

Get to know Salem's Most Haunted Places 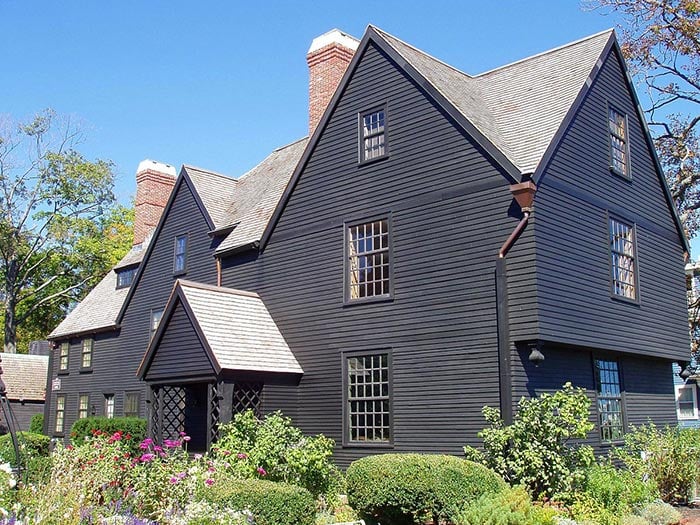 House of the Seven Gables

One of Salem's most famous haunted houses

Spend a night in Salem's most haunted hotel 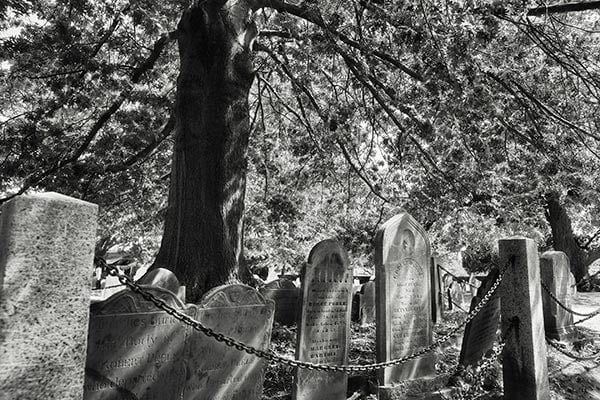 One of Salem's haunted Cemeteries