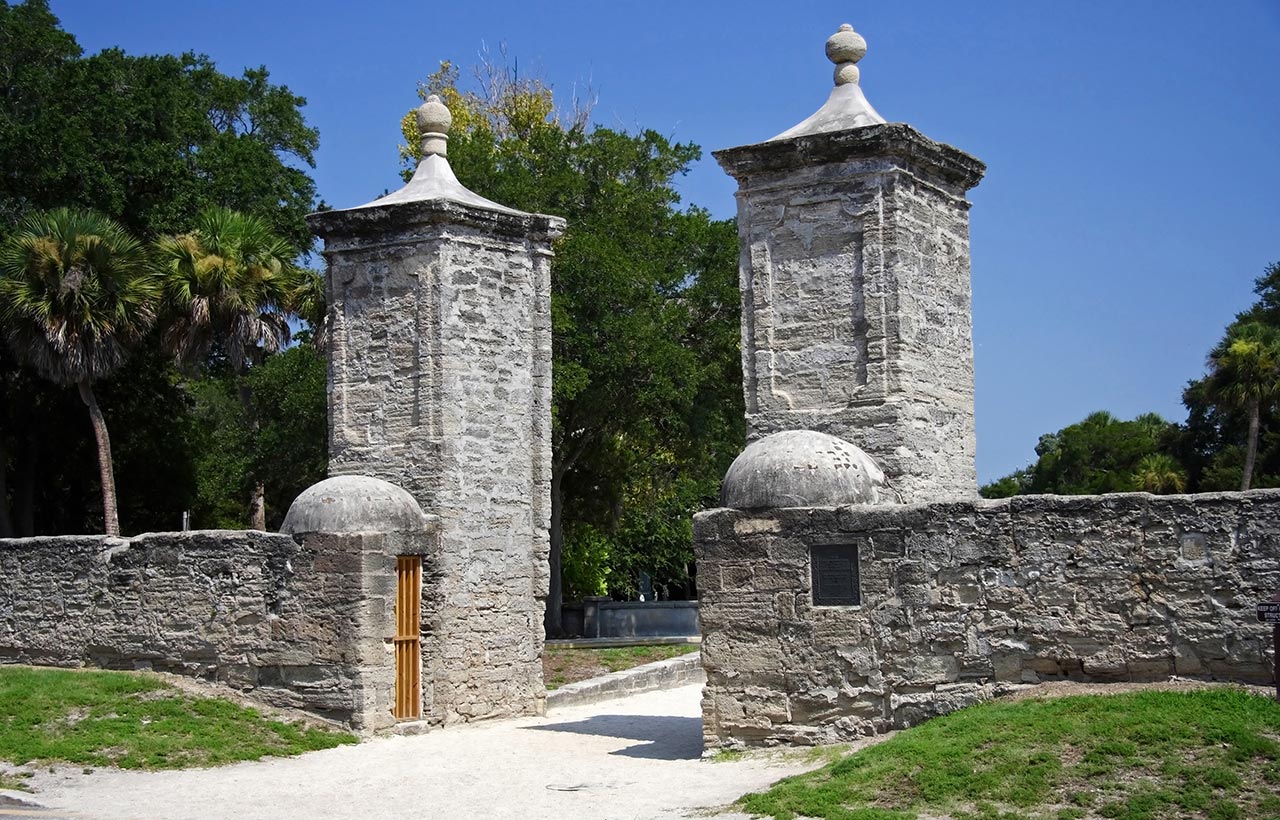 The Old City Gates’ pillars stand confidently at the entrance to this ancient city. The rough and weathered stone appears soft in the quiet glimmer of night. Will I see little Elizabeth in her lacey white dress there waiting for me? She frolics and dances where her fever stricken body was found; disclosing the direction of the Huguenot Cemetery, her ultimate and final resting place.

The Straw that Broke the Camel’s Back: Nearly 150 years old at the time, the city of St. Augustine was at their wit’s end. The decision was made to fortify her outer rims subsequent to a British attack in 1702 where Governor James Moore and his ardent English force pillaged and ransacked the homes of St. Augustine’s residents. Moore, like all others before him, was unable to conquer the impenetrable Castillo de San Marcos, but he was able to completely devastate the heart of the city by crushing the spirit of the townspeople. With this fortification, the ancient city itself would be surrounded by its own impenetrable walls.

In 1704, construction began on the Cubo Line: a mighty earthen wall that surrounded St. Augustine from the Castillo, to the San Sebastian River, and back to the old city. Several large barricades called “redoubts” were heavily supplied with artillery and enhancements to fortify the city. An additional wall, called the Rosario Line, was constructed on the west side of town. With both walls now established, St. Augustine was completely enclosed, never to be overthrown again.

Being an earthen wall, the Cubo Line deteriorated over time and was rebuilt and repaired repeatedly over more than a century when it reinforced St. Augustine. The Old City Gates were built of coquina at the time of the last reconstruction in 1808, and the mighty columns still stand today.

In July of 1821, just a few weeks after the United States’ acquisition of La Florida, the city of St. Augustine was destitute within its coquina walls. With its tenacious pillars, the Old City Gates couldn’t defend its residents from the deadly yellow fever. The Huguenot Cemetery was used as a mass burial site for the fever’s latest victims. In 1839, 1841, and 1877, yellow fever claimed even more innocent lives.

Believed by historians to first arrive in the oldest port in 1649 by stagnant water barrels on ships sailing from Havana, yellow fever was the deadliest of diseases to hit St. Augustine. Ports were ordered closed from Florida to New York in the 1790’s to keep out what was known as “the black vomit.”

An adolescent girl named Elizabeth succumbed to the cruel yellow fever epidemic of 1821, and was among the hundreds buried in unmarked graves across the street from the Old City Gates at Huguenot Cemetery. Her body went unclaimed and was left at the columns to be found by officials. At the time, if you or your family was believed to have yellow fever, your home and belongings were burnt to the ground in order to keep the disease from spreading.

Did poor Elizabeth’s family leave her body at the Old City Gates for fear of losing their home and prized possessions? Was Elizabeth an orphaned girl who fell to her knees in sickness and died at the entrance to her beloved St. Augustine? We may never know. But we do know that Elizabeth and her lacey white dress have been seen dancing and frolicking at the coquina columns. Won’t you say hello to Elizabeth as you enter the heart of the colonial city?

Today, on the north end of the city, you'll find the Old City Gates and Historical Marker. It is located directly across the street from the Huguenot Cemetery. There are often a lot of people hanging around the Gates, taking photos and such. If you come late at night you'll sometimes have the place to yourself, allowing you to try and make contact with the ghosts which haunt here.

Are you visiting St. Augustine? Spending an evening in search of the ghosts which haunt St. Augustine is a great time. Join us on a Ghost Tour for a spooky night of fun!

Get to know St. Augustine's Most Haunted Places

One of St. Augustine's haunted cemeteries